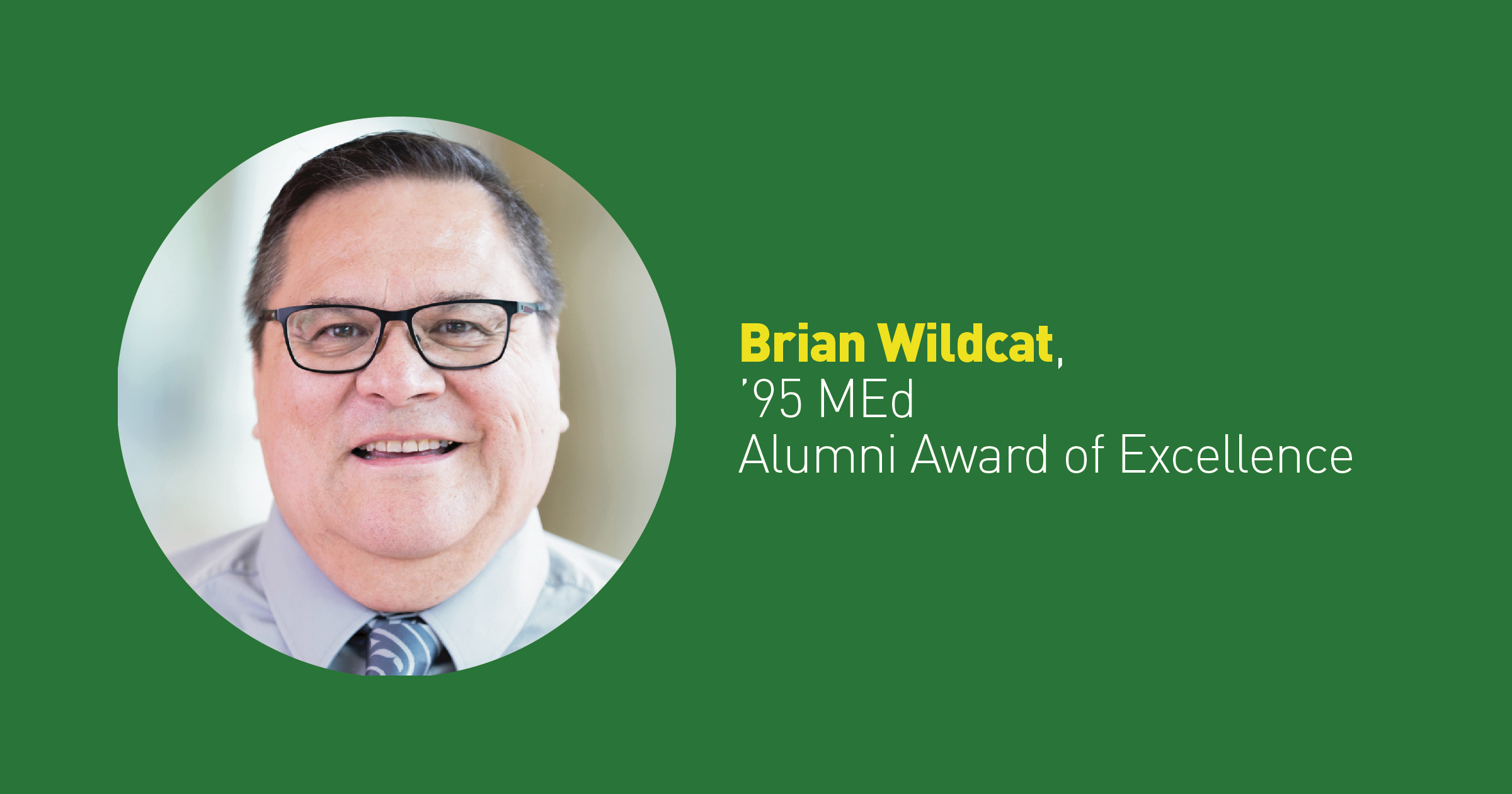 The Cree word wahkohtowin is often translated as “kinship,” and denotes the interconnected nature of relationships, communities and natural systems. Brian Wildcat (‘95 MEd) says this philosophy underpins the formation of the Maskwacis Education Schools Commission (MESC), the authority that oversees the 11 schools and 2,300 students in the central Alberta community that is home to four Cree First Nations.

“We were able to bring a committee together on this idea of improving the lives of children and improving schools for the benefit of all kids in Maskwacis. Using Cree beliefs and philosophies—the main one is wahkohtowin, the idea that all things are related, that built the unity of the four communities coming together for a such a powerful and important purpose—was the driving force behind this,” said Wildcat, who became MESC’s first superintendent.

On May 18, 2018, the Ermineskin, Louis Bull, Montana and Samson Cree bands signed an agreement with the Government of Canada to assume control of and amalgamate four Maskwacis education systems under a single authority. Wildcat said it’s the culmination of a lot of hard work on the part of community members over the past three decades, but the environment created by the Truth and Reconciliation Commission’s Calls to Action helped build the necessary relationships with the federal and provincial government.

“We believe what we’re doing is defining and implementing the treaty right from our own perspective, reestablishing the treaty relationship with government and the purpose and focus of that is for children to successful and healthy and be contributing members of our community as well as Canadian society,” Wildcat said. “Those are the important things.”

Wildcat was inspired to pursue education by his mother, herself a U of A Education alumna, and initially aspired to teach physical education. To that end, he attended Camrose Lutheran College (now Augustana Campus) and the University of Calgary. Working in his home community in the late 1980s, he saw the changes afoot as the four Cree First Nations sought local control of their respective education systems. While it was inspiring to see the four bands vie for their respective independence, Wildcat says he sensed there were some challenges that might be better tackled together.

“At that point, I realized I needed more education, a better understanding of school systems and education politics, so that encouraged me to go back and get a master’s degree,” Wildcat said. “My research focus was on school leadership and system leadership. There wasn’t much out there about First Nations educational leadership at the time, so I put my energy into doing some work on that.”

Now, a year into his role as MESC superintendent, Wildcat says he has been sharing his knowledge with other First Nations communities interested in following a similar path. Long-term plans include building a composite high school in Maskwacis and creating a curriculum based in Cree culture and language, though keeping an eye on daily operations and working to improve academic achievement and retention rates also occupies Wildcat’s workdays.

“It can be a tough job sometimes, but what keeps me going is the future, the sense of hope for the future, and the work that we do with the children in the community,” Wildcat said. “If we do our job right, not only are we affecting the lives of those kids today, we’re affecting and changing future generations.”

Wildcat, whose work has earned him the 2019 University of Alberta Alumni Award of Excellence, said he hopes that aspiring teachers and administrators seek their own greater sense of purpose when they envision their future careers.

“Know why you’re there,” he said, by way of advice. “You’re going into the schools, you have the responsibility to do the right thing for kids. Know that’s the reason that you’re doing this job. Focus on that, and I think you’ll do well.”

You are invited to see Brian Wildcat accept this honour at the Alumni Awards ceremony on Sept. 19 at the Northern Alberta Jubilee Auditorium. Reserve your free ticket: https://www.ualberta.ca/alumni/events/alumni-awards