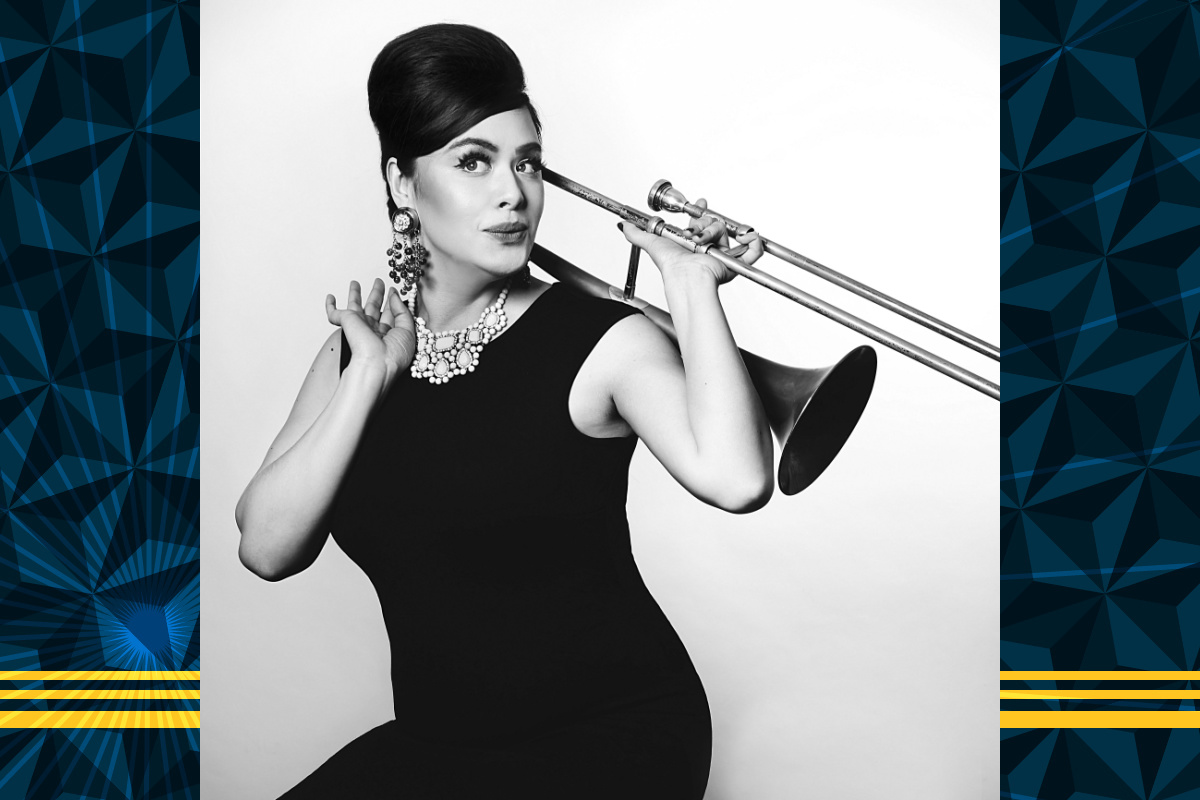 Audrey Ochoa was already establishing herself as a working musician in high school when her parents sat her down for the talk.

“Both my parents were adamantly like, ‘Play music, have fun, but we really need you to get a real education, Audrey,’” Ochoa recalls. “The U of A has a BMus/BEd combined degree, it’s a five-year program and you end up with a music degree and an education degree, so it was like a no-brainer. And it was a good idea.”

And, as it turned out, Ochoa has managed to have it both ways, balancing a rewarding career as a music educator—at Father Michael Mireau Elementary/Junior School in Edmonton, where she teaches Grades 3 to 9—with an award-winning career as jazz musician, bandleader and composer with a growing national and international profile. Her achievements in both fields are being honoured with the University of Alberta Alumni Excellence Award.

The two gigs wouldn’t appear to have much in common, but Ochoa says being self-directed, solution-focused and undeterred by hard work are assets in both vocations.

“As professions, they’re certainly challenging because one job takes place during the day and one takes place during the evening, and you have to find time to sleep and they’re both jobs where you have to create the opportunities,” Ochoa says. “As a teacher, you’re not taking directions from a boss, so you’re constantly problem-solving for hundreds of students and trying to find ways to help them learn. Then, as a musician, you have to create your concerts, you have to pay your sidemen, you have to figure out how having a GST number works... They’re both very full-time jobs.”

The dual nature of her career may have been inevitable, given her background. Ochoa’s parents were both musicians who met on a gig, and her father, who played trumpet for the ESO and Tommy Banks, also worked as a music teacher. The basement of her family home was full of instruments and, since her older sisters latched onto saxophone and flute, she gravitated toward trombone.

“I started playing in front of people right away,” Ochoa says. “We were always required to play at family functions and that sort of eased the way into playing in front of strangers as I got older. My first pro gig where money was involved was Grade 11, and by Grade 12 I was getting calls to play in bars.”

Relationships key in teaching and music-making

Even as she pursued her combined degree, Ochoa established herself as a first-call trombone player in settings that range from big bands to singer-songwriters, eventually releasing Trombone and Other Delights, her debut recording as leader, in 2014. In 2019, she collected the Edmonton Music Prize for her album Afterthoughts. Her latest release, Frankenhorn, for which she was named the 2020 Western Canadian Music Awards Jazz Artist of the Year, finds Ochoa continuing to branch out from the traditional jazz trio format to incorporate elements of hip hop and house music. Remaining open to new sounds and influences is likewise an important part of connecting with learners, Ochoa says.

“Music evolves and if we’re only ever teaching music that was meaningful to people that wrote the curriculum, it’s no longer meaningful to students,” she says. “The music has to be current in order to be meaningful.”

The notion of collaboration, of building relationships, is central to how Ochoa operates in both of her chosen fields. Musicians and educators both have to find their own voices, she says, and be open to honouring the learning styles and creativity of others.

“You shouldn't think of teaching as imposing your wisdom on students. It’s entirely collaborative,” Ochoa says. “We come out of university with a list of orthodox thinking, repertoire we should be playing and methodology we should be using, but you have to get rid of that, the idea that there’s a right and wrong way to deliver information. The only thing that matters is the result. As a music teacher, there are many ways to get to the destination. When you’re dealing with 30 different students in a classroom, there might be 30 different ways to reach them all.

“Any method book we have was written to suit someone else. Make your own method.”

Along with her accomplishments as a performer and recording artist, Ochoa says being the first music teacher at Father Michael Mireau School has been a great source of pride.

“The school I’m currently at, it’s three years old now, and I got to be on the ground floor of building the music culture there. There was no one before me that I’m compared to, there are no expectations of a program because it was brand new. That has been a career highlight, getting to be part of creating a school music culture.”

While many musicians move to major cities to elevate their careers, Ochoa says her feet are firmly planted in Edmonton, not least because it allows her to keep exploring her own musical path—or paths.

“Edmonton music and Edmonton musicians inspire me,” she says. “In Edmonton, you can play in any genre and still maintain a career, but in bigger centres you have to pick a niche you want to excel in, and that’s of no interest to me. I like the diversity we have here. You can do anything you want.”