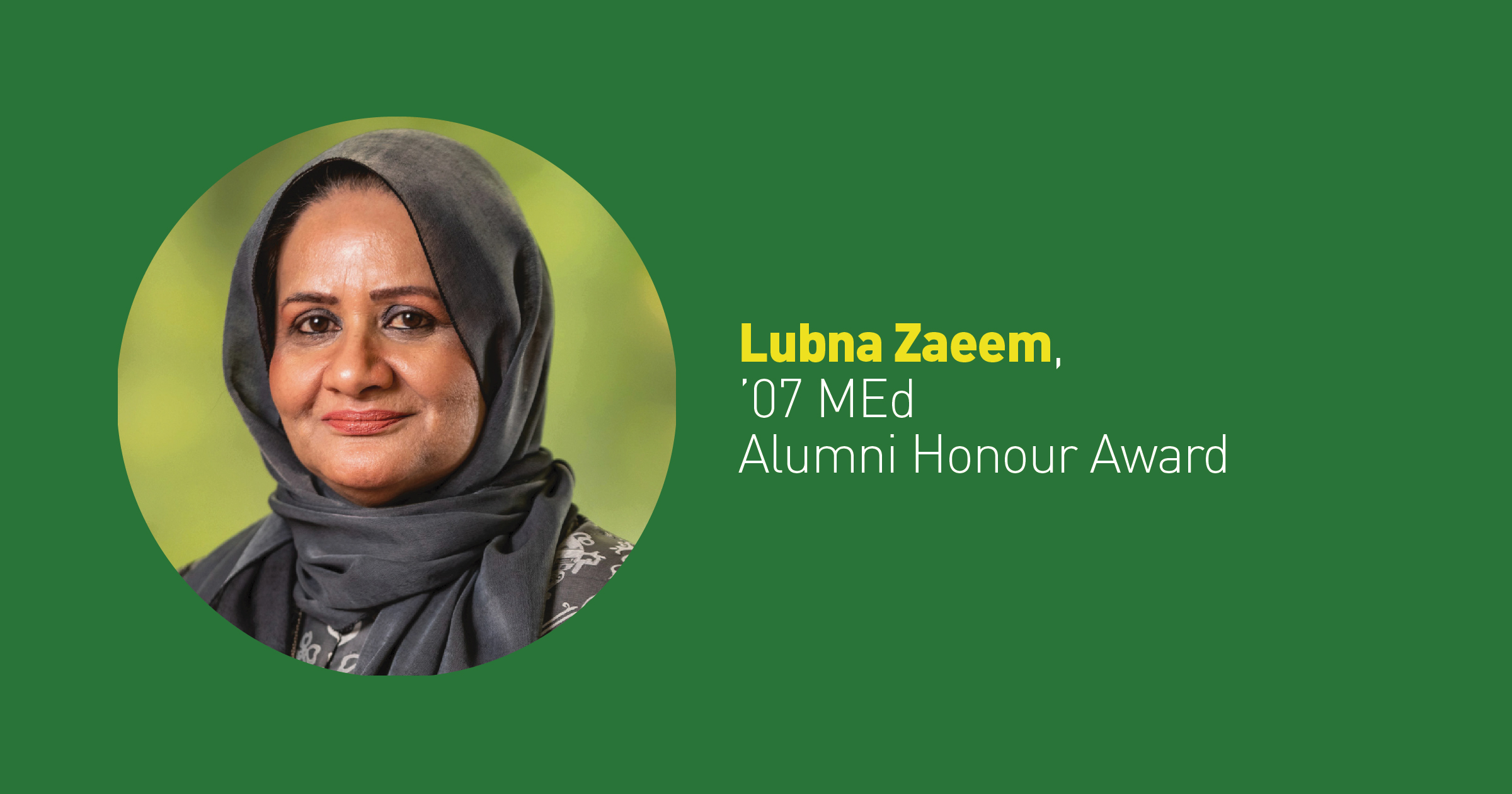 Becoming a registered psychologist in a northern Canadian city wasn’t part of the plan when Lubna Zaeem (‘07 MEd) and her physician husband left her native Pakistan for the U.S. in the early 1990s. But over the past two decades, the 2019 Alumni Honour Award winner has not only made a home in Edmonton, but become a crucial support for newcomers to Alberta through the Islamic Family and Social Services Association (IFSAA).

Zaeem’s degree in microbiology enabled her to help support her family as a lab supervisor while her husband did his residency in neurology at Duke University in Durham, North Carolina. It was there that her work on a project involving the genetics of autism piqued her interest in psychology—an interest that would blossom into a career path when her husband accepted a faculty position at the University of Alberta in 2002. Zaeem admits she’d never heard of Edmonton before relocating, but received a warm welcome.

“The U of A was very supportive when we were moving from the U.S.,” Zaeem said. “Admissions were already done, but because my husband was coming as faculty, there was a clause that made some concessions for dependants and I was able to apply to the Faculty of Education.”

With two young kids at home, Zaeem took a little extra time to complete her master’s degree in educational psychology with a thesis focused on adolescent immigrants’ experiences. But she said it also gave her time to count her blessings, and to decide what to do next with the knowledge she’d acquired.

“We had come to the U.S. with nothing,” Zaeem said. “After what we had achieved, I knew it was time to give back to the community, and I wanted my children to see that it’s not just about being successful in a career, but how you are as a human being and what you do for other human beings. That was the legacy I wanted to leave.”

Ending the ‘taboo’ of asking for help

Zaeem began volunteering with the IFSAA in 2007, sitting on its board and offering individual and family counseling to newcomers not accustomed to seeking such services in their places of origin. Coming from a similar background to her clients made asking for help less daunting for them, she said.

“In the south Asian and African immigrant populations, it’s a huge taboo to go to a stranger and talk about their personal issues. Because they were seeing someone from their own culture and background, it was easier for them to open up with me.”

Zaeem’s work leading outreach and counseling programs, as well as providing cultural competency training for government, law enforcement and service organizations, has earned her the Athabasca Volunteer Service Award, the YMCA Peace Medal and the Governor General’s Sovereign Medal. Being recognized by the U of A with an Alumni Honour Award feels like coming full circle.

“Because it’s my alma mater, this is a huge honour,” Zaeem said. “I give credit to all the professors who built my confidence because I was a newcomer to Canada. It made me move forward in the volunteer work I did and gave me the knowledge I used to move forward.”

You are invited to see Lubna Zaeem accept this honour at the Alumni Awards ceremony on Sept. 19 at the Northern Alberta Jubilee Auditorium. Reserve your free ticket: https://www.ualberta.ca/alumni/events/alumni-awards