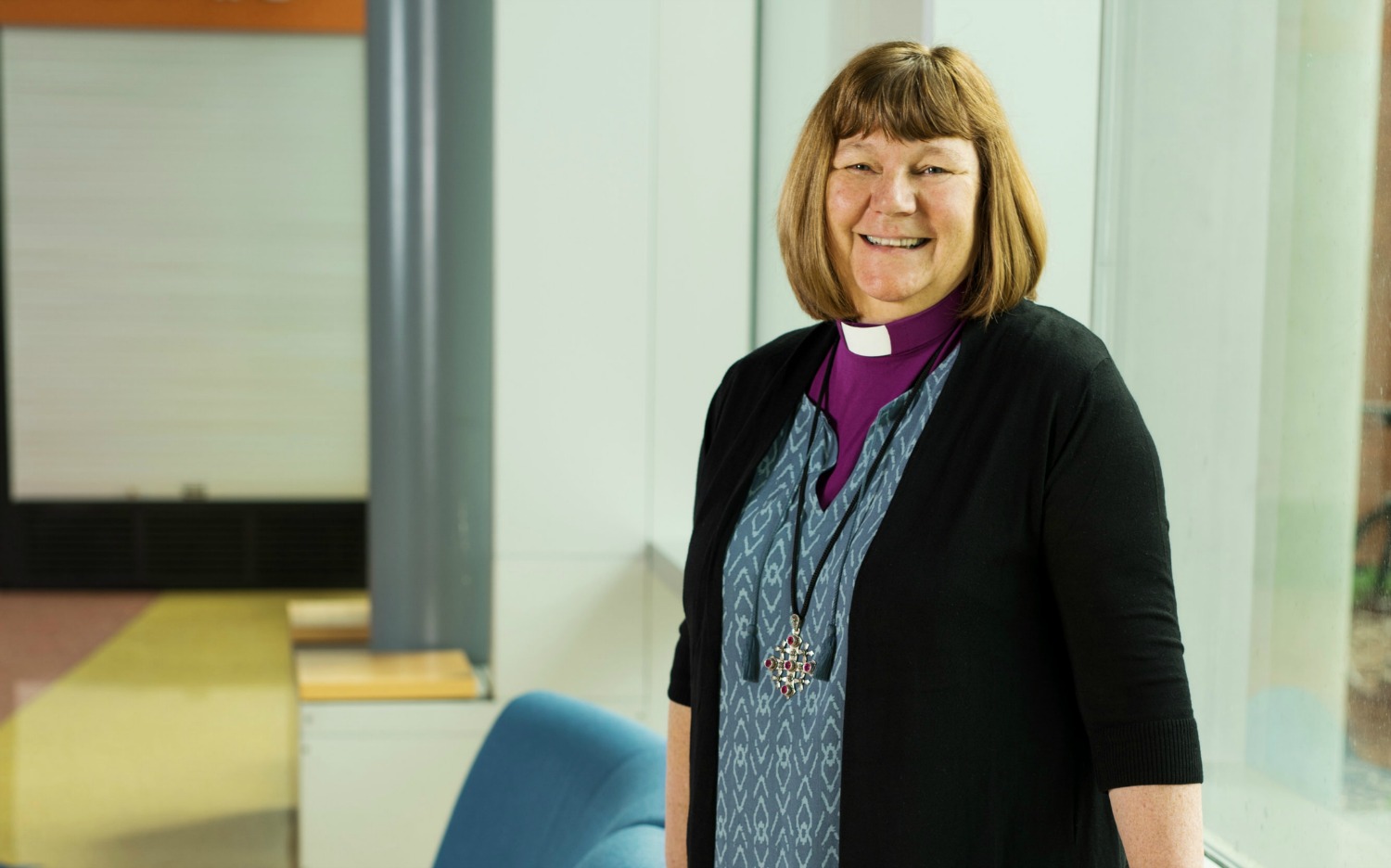 Bishop Jane Alexander would be the first to affirm the lyric of William Cowper’s famous hymn: “God moves in a mysterious way his wonders to perform.” She never dreamed as a music and special education teacher in her native England that she would one day pursue a PhD in educational psychology at the University of Alberta. Nor did she imagine that her academic career would reach “a fork in the road” that would lead her to become the bishop of the Anglican Diocese of Edmonton.

“It’s proof God has a sense of humour, I’ll say that,” Alexander said.

“I believe in people living to their full potential, whether that’s being a university student or living the gospel day to day. So how do you do that—how do you teach people to use what they believe, how do you bring that into transformation, how do you bring it into your workplace, your family? I think it comes together in a messy way but I think at the end of your life you get to stand back and say, ‘Ah, now I see, that’s how it all worked.’

Alexander came to Canada from England in 1990 with her young family when her husband took a job at U of A Hospital. Though she didn’t think they’d remain in Edmonton for long, and though the family was growing, Alexander decided to pursue a master’s in educational psychology at the U of A. She says she knew she had arrived somewhere special when she arrived in stats class with her newborn son in tow.

“I remember doing the lab exam and a staff member at the time walked around with him while I took the test. People were incredibly accepting,” Alexander said. “The U of A is about equipping people, helping them to do the things they’re called to do, and it doesn’t matter if you’re young or old or if you have a small child attached to your back. It was just really different from any other experience I’d ever had.”

As she pursued graduate school, research and teaching, Alexander also became active in the local Anglican church, eventually serving as a deacon—a role which allowed her to perform church functions while continuing to work in the secular world. But as she completed her PhD in 1997, Alexander says another path beckoned.

“Much to my surprise, because I was very much enjoying teaching at the U of A, I was overwhelmed with the feeling I should be doing something else,” Alexander said. “I wasn’t disinterested or fed up with what I was doing, it was that all of a sudden another opportunity came up and I saw the connections between all the things I had been doing.”

This new path led Alexander to Newman Theological College, where she completed her master’s in theological studies. In 2001, she was ordained as a priest and worked in various parishes in and around Edmonton until she was appointed dean of All Saints Cathedral in 2006. She was installed as Bishop of Edmonton in 2008.

Alexander says her focus on inclusion for people with disabilities in her graduate work has continued and expanded to “supporting the dignity of the human being” in the church and in the wider community.

She has been an outspoken proponent for marriage equality in the Anglican church, a participant in Truth and Reconciliation Commission, and co-chair (with U of A psychology professor Jeff Bisanz) of End Poverty Edmonton, among other community-based causes. She also helps oversee programs administered by Edmonton’s sister diocese in Burundi. Alexander says the church and the university share a similar capacity for promoting positive change in the world.

On Monday, Sept. 25, Alexander will be recognized with a 2017 Distinguished Alumni Award, an accolade she says has special meaning for how her time here shaped her life.

“I’m extraordinarily grateful for this honour,” she said. “The way you’re encouraged and nurtured at the U of A is second to none. I would never have believed in myself for being able to do things I did. It sounds like a cliche to call it a life-changing experience, but it really was.”

You are invited to see Bishop Jane Alexander accept this honour at the Alumni Awards ceremony on Sept. 25 at the Northern Alberta Jubilee Auditorium. Reserve your free ticket: uab.ca/aw2017