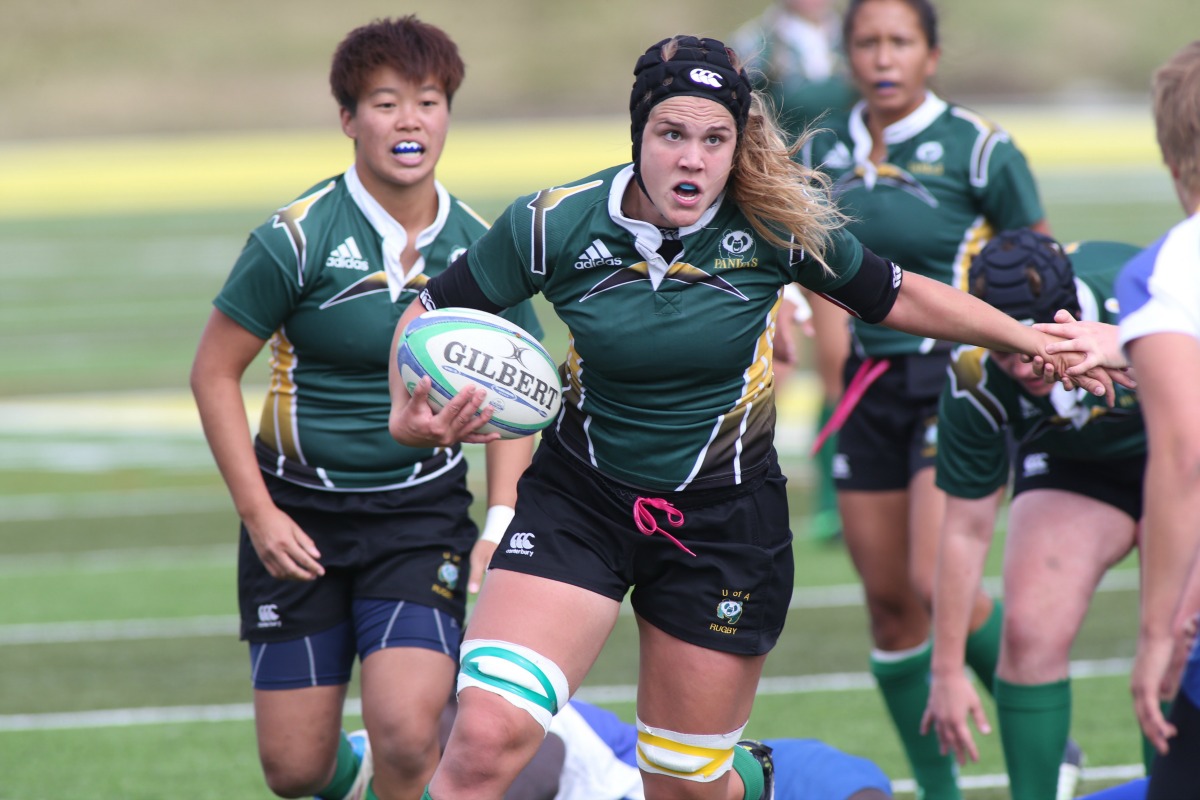 If you want to know what it takes to balance athletic pursuits with academic excellence, Sara Haring would be a good person to ask. The University of Alberta Pandas rugby player and secondary education after-degree student was named an Academic All-Canadian—a designation conferred by Canadian Interuniversity Sport (CIS) to varsity athletes who maintain an academic standing of 80 per cent or better—for the fifth time in 2016.

Haring says her passion for learning and for sports are more complementary than you might expect.

“A lot of the skills we learn in university and varsity, they combine the same things—balancing your time, setting priorities and sacrificing some other things so you can excel at what you’re trying to do,” she says.

Haring completed an undergraduate degree in kinesiology at UAlberta before embarking on her education degree, but she has spent every year of her post-secondary education playing rugby, a sport she took up while in high school.

“I got too many penalties in basketball, so I thought I’d give rugby a try,” she laughs. “It’s great because there’s a spot for everyone on the field, it’s a super-inclusive culture, and as you get up into higher levels, there’s such a commitment to excellence that’s almost unique to the sport because of how physically challenging it is.”

Haring admits her dedication to rugby—and the daily training regimen that entails—precludes taking up some of the opportunities her fellow students enjoy, but it’s a choice she’s willing to make as she prepares for what she calls her dream career teaching physical education and math.

“There are so many extracurricular things I’d like to be part of—Community Service Learning and stuff like that—but because of our training schedule it’s hard to commit to those things,” she says. “So for me in education, it’s finding a balance of getting as much practical experience as I can while competing.”

A culture of winning—and caring

Like Haring, Pandas wrestler Sheina Fisher is pursuing her after-degree in secondary education after completing a degree in kinesiology. But Fisher is a first-time Academic All-Canadian, owing to an injury that sidelined her as an undergraduate at the University of Calgary. She says the team culture at UAlberta is a big reason she decided to return to the mat eight years later.

“In wrestling, you have to be comfortable with your team because you’re really close to them physically and mentally,” Fisher says. “Our coach has really cultivated a family atmosphere with the team. It’s drilled into you. We’ve done retreats, we’ve gone camping for the weekend. You get to know everyone a lot better, you care about them a lot more. We’re like sisters.”

Watch video of Fisher (green and gold uniform) in a match against Alyx Paulson (University of Saskatchewan) at the 2016 Golden Bear Open.

Though this will be Fisher’s last year competing in varsity sports, she hopes to continue sharing her love of the sport as a phys ed teacher and wrestling coach, citing Canadian wrestler Erika Wiebe’s Olympic victory as a source of inspiration for young women.

“I think wrestling is a growing sport, and I think you’re going to see more people, especially girls, on the wrestling team,” Fisher says. “It’s such a great sport to be in to encourage whole body health and fitness, because you need every single part of your body.”

Making the team, making the grades

Academic All-Canadian Adam Zajdel, a second-year bachelor of education student and Golden Bears football player, also came from Calgary to join the U of A, drawn here in part by the team culture that supports success on and off the field.

“Since Chris Morris came on board as head coach, he’s set up some very good structures. All the first-year guys have to take study hall and there are always tutors available. Even if you don’t use them, knowing that those supports are there makes a difference,” Zajdel says. “The emphasis on school above football is pretty big. I know not all teams do that. That’s one of the reasons I chose U of A in the first place. It was good to hear, especially for my mom.”

It must be doubly reassuring to Zajdel’s mom since his younger brother, a first-year U of A business student, also joined Golden Bears football. With the season over, Zajdel has plans to spend a semester studying in Madrid, the better to prepare for his career as a high school Spanish teacher. Aspiring to a vocation that matches his interests has been key to both elevating his marks and giving him a healthy perspective about the sport he loves to play.

“When I first came to university, one of the misconceptions I had was that my life was going to be strictly football and school. It’s tough because you don’t allow yourself to take advantage of opportunities you have as a regular university student,” Zajdel says. “ At the end of the day, football is just a game, so I’m trying to balance things a bit more and take the opportunities as they come.”

Feature image: UAlberta Pandas rugby player Sara Haring (foreground, holding ball) shows the grit and determination that has earned her the title of Academic All-Canadian a total of five times.