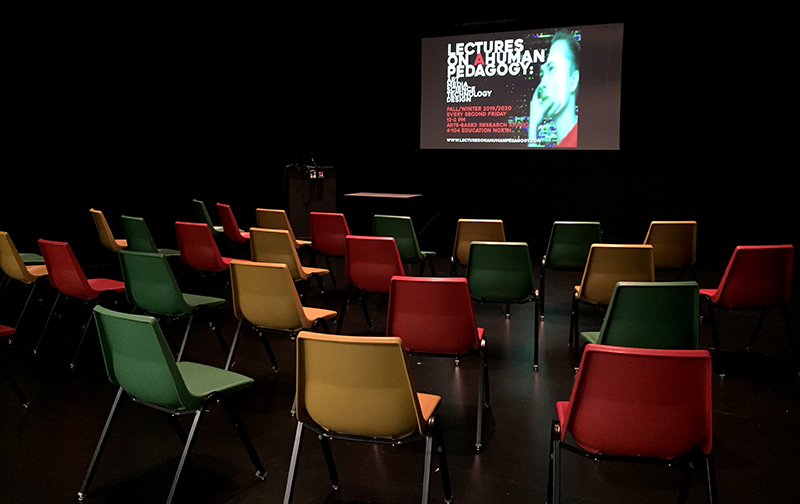 Greta Thunberg is not the only one looking to foster hope and inspire change in the current political and ecological climates. A speaker series organized by a professor and student in the Department of Secondary Education hopes to spark conversation and foster community in a similar vein.

Titled Lectures on Ahuman Pedagogy, the series aims to tackle what PhD candidate and organizer Jessie Beier describes as “tricky topics” that exist in both academia and the world beyond. While the focus is on education and pedagogy in particular, Beier explains that the scope is much wider than one discipline or topic.

“Talking to the teachers and youth we work with, it’s hard to deny the kind of anxiety, depression, and despair they feel with the world right now,” says Beier.

“I think it’s too easy to say ‘Don’t worry! Don’t despair!’ instead of recognizing that we don’t have the answers, but that we can start thinking about this stuff together. If we don’t create spaces to talk about it together, then it is denialism, which actually does a disservice and decreases the sense of hope because if you can’t even talk about it then things feel even more hopeless.”

Designed as an experimental lecture series, Beier and professor jan jagodzinski invited speakers to present something that they are working on right now that doesn’t have to be completed, or something they struggle with as both a person and an academic thinker. Speakers come from a variety of fields such as social studies education, art and design, science, and technology. Some feature department members like PhD student Adriana Boffa and professors Cathryn van Kessel, Marc Higgins, and Jason Wallin. Other presenters come from outside the Faculty of Education, like UAlberta art and design professor Natalie Loveless or CalArts media studies professor Andrew Culp. Beier says that the diversity of speaker perspectives was intentional, with a specific perspective in mind.

“No one idea, theory or person can account for everything,” says Beier.

“Everything is so complicated. One discipline or one person or one theory won’t have the answer, so we need a collective. It won’t be homogenous, but we can be different together, and be okay with that difference.”

The community that Beier and jagodzinski aim to build with the speaker series resembles what Beier describes as an “untraditional research project” where people from different disciplines get together to think and study together. As a result, each installment of the speaker series will tackle questions of pedagogy and education very differently.

“We really wanted to embrace that idea for the lecture series in that we had some rough ideas of what we wanted to talk about, but it’s quite open. Between what everyone brings to the table, we hope to create conversation.”

Despite all the differences in topics and perspectives, there is recognition that variety might be the best approach to finding common ground.

“Beier and jagodzinski have gathered an impressive array of speakers for Lectures on Ahuman Pedagogy,” says series-opening speaker Andrew Culp.

“They are asking the tough questions of digital dystopias, runaway climate change, and global violence. Each talk emerges from a shared recognition: that only by reaching far beyond ourselves will be find out how our troubling times came to be, and if we are lucky, will be overcome.”

“The Lectures on Ahuman Pedagogy series highlights the urgent need to consider our present context as we muddle through a nexus of issues in relation to education,” she says.

“I am honoured to be included as part of this series, and have been learning a lot from the other speakers. The ideas themselves have been helpful, and the community that is forming through this series is equally important as we strive to think, unthink and rethink complex problems.”

Other than education and pedagogy, one of the other themes of the speaker series is the idea of the “ahuman,” as well as what it means to be human. Beier says the theoretical perspective tries to bring attention to how beings and forces outside of humans impact us and how we develop as people. Examples she points to include the “inhuman” such as algorithms, social media, or big data, as well as the “nonhuman” which refers to geological forces, animals, environmental forces, or even gut bacteria. For Beier, these forces complicate what it means to be human in our current world.

“I think it helps to continue to displace this sense of not only ego, hopefully, but also a certain attachment to what it means to be a human in the world,” says Beier.

With the spectre of ecological collapse from climate change and the rise of extreme ideologies like fascism, Beier hopes that the speaker series can foster an academic community willing to do the work to think about new ways of being in the world.

“We’re trying to think through that, to start thinking about what kind of questions can inspire us to work together differently,” she says.

“[The speaker series] is interested in the question of learning and pedagogy where kinds of relationships in the world and where we learn are represented: with the earth, with other people, concepts, ideas. These aren’t our ideas, though. For example, many Indigenous cultures have a long tradition of this kind of thinking. The political impetus now is to explore what is possible to think given what kind of relationships we can build towards a less-frightful future.”

Lectures on Ahuman Pedagogy are hosted on alternate Fridays from 12 to 2 p.m. until January 31, 2020. Each talk is recorded and posted to lecturesonahumanpedagogy.com.