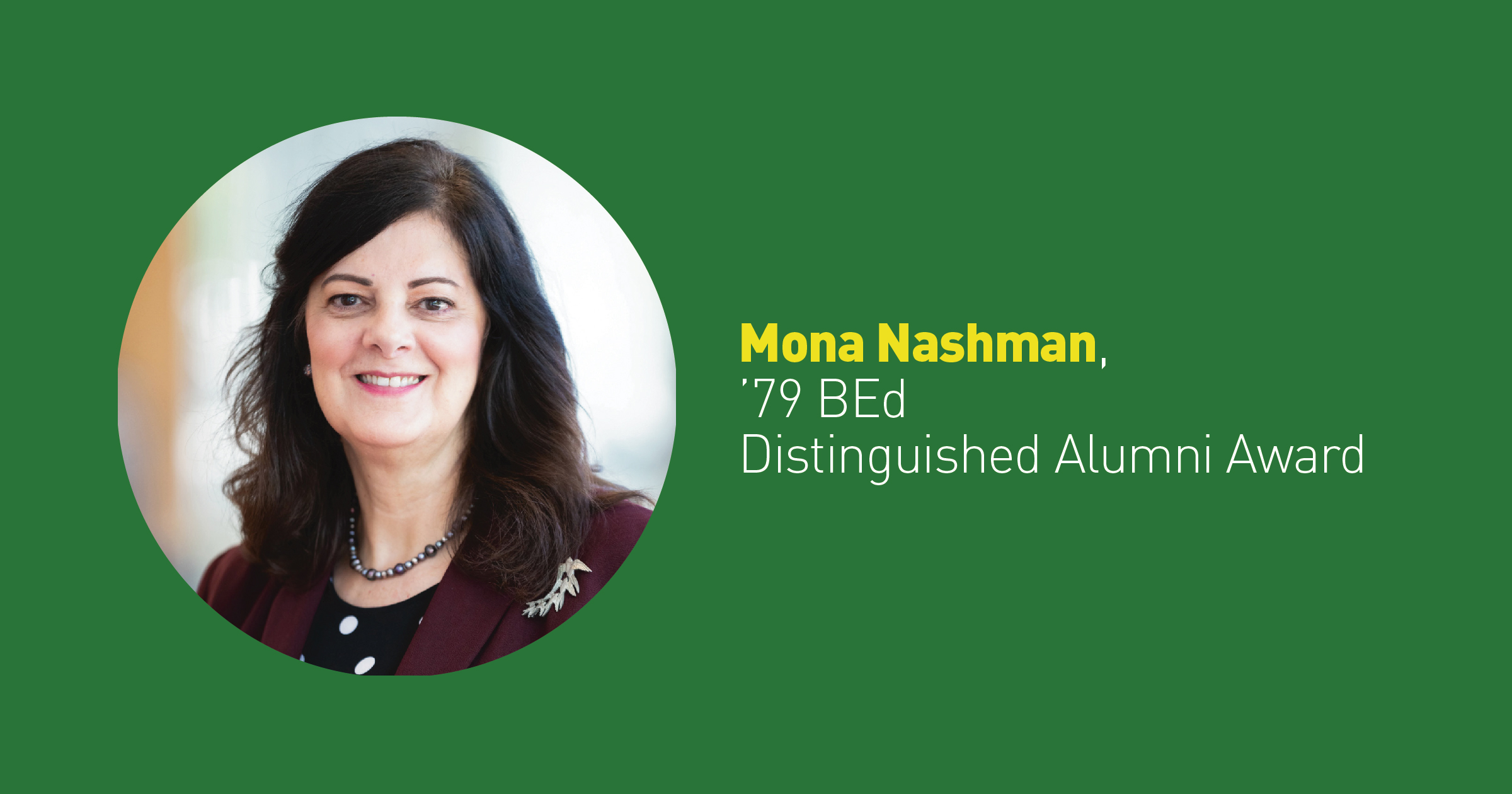 Mona Nashman (‘79 BEd) has spent much of her career as an educator working in international settings. But the native Edmontonian says her essential approach to teaching was formed as a University of Alberta education undergraduate four decades ago.

“I tell young teachers the same thing today I learned back in 1979: use the curriculum as a vehicle to teach kids. But if you’re teaching the curriculum and you’re leaving kids behind, you have done nothing,” Nashman said. “You don’t need a bachelor of education to cover curriculum. You need a bachelor of education to understand pedagogy, to learn the science behind learning. That science we learn must be the vehicle we use to connect with kids.”

That child-centred approach to education has been Nashman’s modus operandi since she was a newly minted teacher taking on a “difficult” Grade 1 class at Edmonton’s Inglewood School that had already driven off two previous teachers by winter break. Winning over those students—Nashman touts a combination of love and food—marked the beginning of a varied career in teaching and program development that spanned a series of Edmonton public schools, until Nashman was enticed by one of her principals to try her hand teaching abroad—first in Munich, Germany, then at the American British Academy, an international baccalaureate school in Muscat, Oman.

Nashman partly credits her Muslim upbringing and the “villager Arabic” she learned from her Lebanese immigrant parents with helping her settle into her Middle Eastern posting. A few semesters in, she was offered the position of school superintendent, despite only holding a bachelor of education degree. Nashman said during this time she relied on the support of the Edmonton Public School Board, which had granted her a leave, then a secondment to enable her to work abroad, as well as offering advice and resources to get a handle on her new administrative role.

Extending education far beyond the classroom

During the final year of her secondment, the attack on New York’s World Trade Centre led Nashman to decide she needed to remain in Oman to counter the racism and Islamophobia that arose in its wake. To help instill an international outlook in her pupils, she founded a student leadership symposium that got them directly involved in community development projects like bringing power to a village in Bangladesh, building a school in Tanzania, and fundraising for survivors of war in South Sudan.

“Is education about a curriculum we deliver, or is it about teaching the kids about the world around them, and how can they influence the world in the best possible way for the betterment of humanity?” Nashman said. “At least 20 per cent of the graduates of that program went on to work in NGOs. It’s not because of what they learned in the classroom.”

Nashman also had a transformative effect on her staff, including more Omanis in teacher training opportunities, recruiting internationally to match the diversity of the student body, and creating the opportunity for teachers to pursue master’s and doctorate degrees. And, to show that she didn’t think lifelong learning was just for staff and students, Nashman enrolled in the master’s and doctorate programs herself.

For these and other contributions to international education, Nashman was awarded the MBE, the third- highest honour in the Order of the British Empire, and was inducted into the Association for the Advancement of International Education Hall of Fame. She’ll add to these accolades the 2019 University of Alberta Distinguished Alumni Award, which she said has special meaning coming from the place that set her on her career path.

“I think if the U of A is proud of my accomplishments, then that’s the biggest award I could ever receive,” Nashman said.

‘We are educating the intellect of nations, not just one nation’

After returning to Alberta, Nashman became involved with the Edmonton Islamic Academy in September 2015 as an educational leader, helping to figuratively build connections to the surrounding community, and to literally build a “STEAM” space within the school where students can explore their curiosity and creativity in science, technology, engineering, art and math. Nashman says reaching every learner and nurturing their curiosity should be the education system’s foremost priority.

“Every school out there, we are educating the intellect of nations, not just one nation,” Nashman said. “If we just focus on delivering content, we don’t teach kids and we don’t empower teachers to use their creativity and their autonomy.”

And when she speaks of teaching children, Nashman means helping them achieve their potential as human beings, not just as students. The world, she says, is depending on it.

“There are good things happening in our school system, I know there are. But there can be better things happening, where we teach kids to bring the world together, where we teach them the commonalities that exist in humanity. Because the media and politicians are doing such a good job of showing them the differences. So who is going to counter that? Schools can do a better job.”

You are invited to see Mona Nashman accept this honour at the Alumni Awards ceremony on Sept. 19 at the Northern Alberta Jubilee Auditorium. Reserve your free ticket: https://www.ualberta.ca/alumni/events/alumni-awards