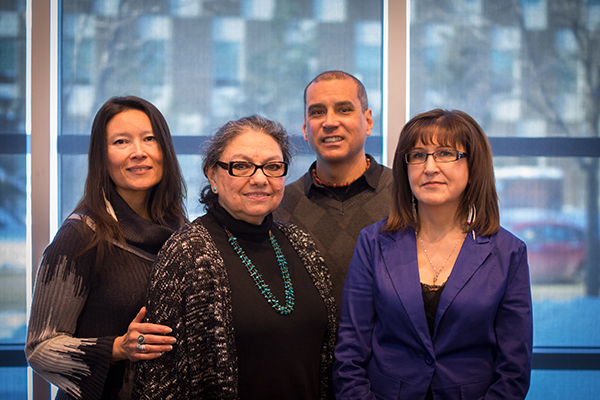 In response to a question in the EDU 211 class asking why it's necessary for students to better understand racism when it comes to Aboriginal people, one student wrote the following:

“I believe the change in Aboriginal education begins with us future teachers and only once that change occurs within us can we be the change we want to see in the world.”

That is the kind of answer professors Cora Weber-Pillwax, Evelyn Steinhauer, Rebecca Sockbeson and Dwayne Donald were hoping to elicit when Aboriginal Education and the Context for Professional Engagement was offered for the first time in the fall semester after more than 10 years of trying to get such a class approved.

The efforts of all four and the 10 graduate students who led the class’ seminars were rewarded with University of Alberta Human Rights Education Recognition Teaching Award on Tuesday, December 10th, 2013. The award is given to instructors that increase the profile of human rights education and issues at the university.

“The thing that I liked and I appreciate is that it came from our colleagues,” said Weber-Pillwax.

Watch this clip from the awards ceremony:

The award helps raise the profile of a class that was offered for the first time in the fall semester and is now mandatory for education students. The purpose of the class is to develop in pre-service teachers the knowledge of Aboriginal people’s histories and educational experiences to help them become more effective teachers in working with Aboriginal children.

The reactions of students to content in the class were varied, according to all four professors, but a common theme that emerged in students’ reflective writing was how little students knew about Aboriginal issues.

“To hear of their awareness of what they didn't know, starting to raise questions about how it is they could be as educated as they are and not know some things,” said Donald. “The work of the seminar leaders--which was so key--was just to hear about some of those shifts that started to occur [in students]."

Reactions of students to the material covered most of the emotional and intellectual spectrums, according to Steinhauer.

“There was some resistance initially – they didn’t want to talk but then they really, really engaged,” said Steinhauer. “For example, racism was a difficult topic to address. I got the sense that they didn't really want to talk about this topic. But as uncomfortable as this topic is, it is the lived experience of many Aboriginal children, therefore it must be addressed. The discussion must move beyond simply trying to define racism. The pre-service teachers must acknowledge that it does exist, and they must instead find effective ways to address it in their classrooms.”

What also made the class unique was the requirement of all students to take part in two cultural experiences. Those experiences ranged from experiencing different ceremonies, watching films or taking part in panels with Aboriginal teachers or non-Aboriginal professionals who work with Aboriginal communities. Donald himself offered a walking tour of the University of Alberta, which was once Aboriginal land.

Sockbeson said the award belongs to everyone who helped bring the course to fruition. “If such an award is given to us, it’s given to everyone. There are so many people involved in developing this course. In receiving the award, we acknowledge all Aboriginal people; this award celebrates the work toward creating social and political change for Aboriginal students, that they may experience improved schooling and ultimately heightened quality of life. It is for them that we are driven to teach this course,” Sockbeson said.