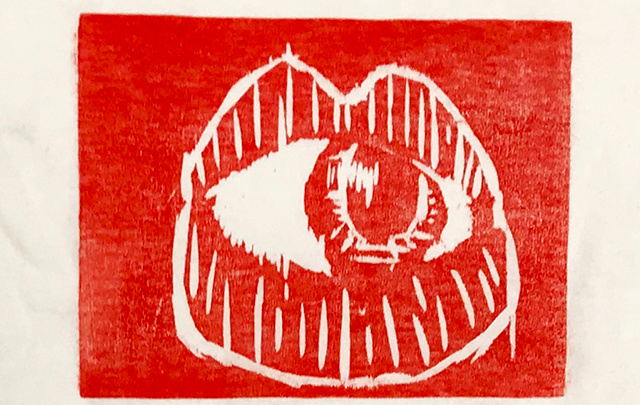 Michelle Lavoie wanted to find new ways to mentor 2SLGBTQ+ youth and young adults through art practice. Her research using narrative inquiry methodology yielded hundreds of creative works and new insights into co-created, dialogic, non-hierarchical ways of thinking and knowing. It also earned Lavoie one of the most prestigious academic awards a Canadian student can receive.

Lavoie will receive her PhD in Educational Policy Studies on Thursday, June 25 at the University of Alberta’s virtual convocation ceremony, where she’ll also be awarded the Governor General’s Academic Gold Medal for highest academic achievement at the graduate level.

Upon completing her MFA in printmaking at the U of A, Lavoie says she found herself interacting with trans and non-binary young adults in various capacities as a studio art instructor, artist-in-residence at Camp fYrefly and community arts program coordinator. She noticed a shortage of adult education research to support these young people, who don’t always feel safe or fully included in formal educational environments.

“Thinking about a better way to serve them, I wondered about mentorship which is implicit in studio-based arts teaching and learning, and if that might act as a form of support for 2SLGBTQ+ youth and young adults,” Lavoie says. “So that was something pulling me back to graduate school.”

An opportunity to work with U of A nursing professor Vera Caine on an arts-based research project, introduced Lavoie to the methodology of narrative inquiry, which uses storytelling and narrative ways of thinking and knowing to understand experience. Caine would become Lavoie’s co-supervisor, along with former U of A education professor Kristopher Wells, when she decided to pursue research involving visual narrative inquiry in 2015.

Lavoie identified participants for her research and invited them to work alongside her in a series of printmaking workshops as a way of establishing relationships and evolving a way to uncover the “silent and silenced stories” they carried as trans and non-binary people.

“I didn’t ask them to tell any specific stories, I didn’t set up questions for them, I just wanted them to find the stories they wanted to talk about,” Lavoie says. “The art-making process is this beautiful process where you can make art and reflect on it, and come to stories later.”

The research participants created hundreds of images over 16 five-hour sessions that spanned a year and a half, then created short stories, poetry and even a play to reflect on their stories of experience. Lavoie says she was able to translate this co-creation into a series of journal submissions focusing on the possibilities of artmaking in narrative inquiry to create spaces of participant engagement; developing relational research by learning alongside participants; and how trans and non-binary young adults use artmaking, storytelling, and counterstories to make space for themselves and build communities of difference.

But just as important, Lavoie adds, was the fact that the participants were able to use the products and insights obtained from the research in their own lives as what she calls relational assets—skills and resources co-created in relationship that foster a sense of connectedness to self and others.

“These things they created in research, the artwork and writing, reverberated in their communities in ways I couldn’t have imagined. They’re using them as interventions, as tools to talk about mental health and isolation, to build connections that help them support themselves and their communities,” Lavoie says. “That was the most powerful part.”

With her doctorate complete, Lavoie wants to thank her supervisors, as well as Dr. Evelyn Steinhauer, Dr. Florence Glanfield and Dr. Sean Lessard, for their support. But she says she isn’t done thinking about ways of reimagining mentorship as a co-created, dialogic and non-hierarchical teaching and learning process that could inform programs in public schools, post-secondary institutions and community agencies.

“I guess I’m still figuring out the different connections and possibilities of art-making in research, because it’s more than knowledge translation,” she says. “It’s curating and art-making, it’s engaging different audiences and there’s teaching and learning in that too. It’s about opening dialogue and making space for these stories that haven’t been seen or told.”