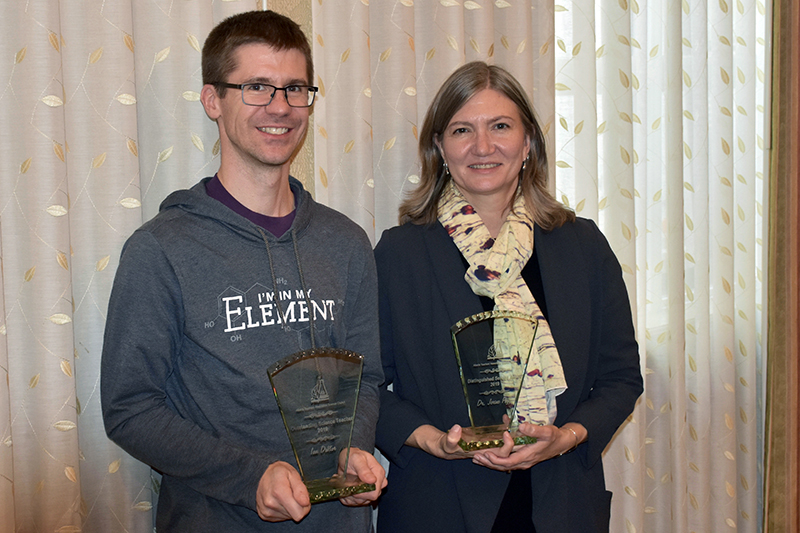 “I first met her in my role as a high school teacher when she was providing professional development for teachers. During that time I realized she provided excellent workshops with very useful information and resources. A couple years later, in my role as the president of the ATA Science Council I became more aware of the work that she did supporting science teachers; she was happy to present her research and support teachers at various ATA conferences throughout the year.”

The feelings of respect between student and supervisor are mutual, with Pegg championing Doktor’s successes as an educator, some of which have received local news coverage.

“Ian is an enthusiastic and innovative teacher who is continually seeking new ways to engage his students in authentic science learning,” Pegg says.

“In addition to his regular classes he also runs an after-school science and engineering club where students conduct scientific research and engineering design projects of their own choosing. Last year his students' research resulted in a peer-reviewed scientific paper published in the Journal of the Royal Astronomical Society of Canada.”

Even though they both agree that the other deserves their respective award, sharing the stage together was a surprise, but a welcome one.

“When I found out that both Ian and I would receive the awards I thought ‘Oh no, people are going to think it’s rigged!’” jokes Pegg.

The two awards recognize contributions to science teaching and education excellence in Alberta, and for Pegg it’s particularly meaningful since Albertan teachers involved in the Science Council administer the awards.

“It’s even more meaningful to me that teachers decide, and not my academic peers. It’s teachers in the schools and the work that I do, and how that connects to schools is very important to me.”

The ATA Science Council adjudicates two award categories each year. The Outstanding Science Teacher Award recognizes excellence in science teaching in Alberta. Criteria may involve contributions to science teaching such as articles, workshops, curriculum development and other instances of professional development. Strong consideration is given to outstanding classroom teaching over an extended period of time. The Distinguished Service Award acknowledges broad, extended contribution to science education in Alberta. The criteria may include curriculum development, in-service, outstanding classroom teaching, professional publications, and contributions to the greater community related to science education.