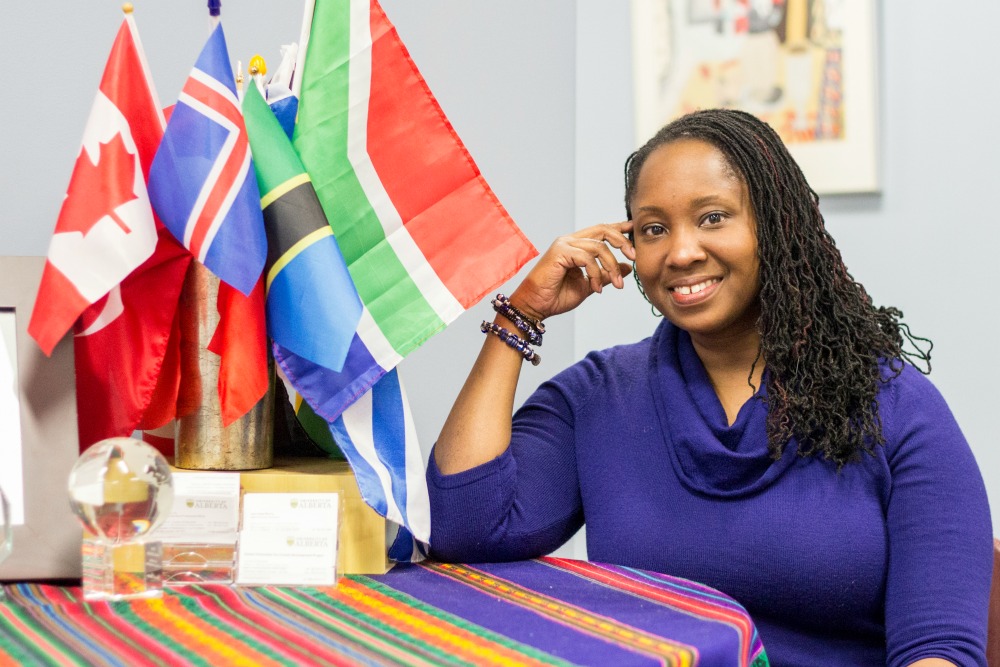 In 2015, the University of Alberta was listed in Times Higher Education’s ranking of the top 100 “most international” universities, moving up nine spots to number 87. Now, a visiting scholar from the United States is probing the policies and structures that support international students at UAlberta.

Sosanya Jones, a professor in Southern Illinois University’s Department of Educational Administration and Higher Education, arrived at UAlberta’s Faculty of Education as the 2016 visiting Fulbright Scholar this past January. She’s pursuing research for a project entitled “Inclusionary Internationalization: A Multi-Case Study of Policies and Practices in Alberta's Institutions of Higher Education.”

‘Intentional’ approach to internationalization on campus

“I’m interested in the politics of diversity, state policy and federal practice with regard to diversity work, and related to that, how policy and practice affects and supports marginalized populations, particularly students of colour,” says Jones. “In coming to the U of A, I want to find out how people are supporting people coming in from other places, if there are specific teaching courses and developmental courses for faculty, and what services are offered.”

Jones says she was overwhelmed at first by the size of UAlberta, which has roughly twice the student population of her university in Carbondale, Ill. But she feels encouraged that she’s chosen an appropriate setting for her inquiries.

“I’m a little blown away by how integrated discussion of internationalization is on pretty much every level—it’s not just something you see on a brochure here. People have been very reflective and intentional about reaching out to international populations, incorporating them into the curriculum and activities. There’s more than one office set up to support international students. It’s very progressive.”

But, Jones adds, such apparent successes can breed complacency in a time when educational institutions must be ever vigilant to mitigate xenophobia and promote interaction between different campus populations.

“Because internationalization is so integrated, because a school is touted as being progressive, people sometimes have a blind spot to some of the issues. They’re like, ‘Oh, we’re doing that well, so we don’t need to look at what the problems are.’”

UAlberta’s reputation as an international institution is predicated in part on large gains over the past several years in the university’s international student population, which now makes up more than 14 per cent of undergraduates and 35 per cent of graduate students—the latter being among the highest percentages of any university in Canada.

The benefits of internationalization

Jones says the push for internationalization in post-secondary institutions stems from a number of different notions about its value, with some perceived benefits more tangible than others.

“That’s a question a lot of people have different opinions on,” she says. “Some people would say from a marketing standpoint it makes them more competitive—it’s a selling point that we can create global leaders, people who have had experience interacting with people from different cultural groups. And then from a financial standpoint, I’ve heard that it drives revenue. International students bring in more money because they pay more fees. I think, ideally, the benefit of internationalization would be if there were an exchange of knowledge, and people were being exposed to new ways of thinking.”

Whatever the impetus for it, one aspect of internationalization is a having a positive impact on Jones’ work in the form of networking opportunities.

“I’m meeting lots of international scholars who are here to study internationalization in different ways, so we’re going to try to partner and supplement each other’s work.”

Jones says she sees Canada as being ahead of the U.S. in terms of creating policies that support diversity and inclusion in higher education. She adds that before returning to SIU in May, she’ll devote some time to exploring how support for internationalization and international students extends beyond campus.

“I think what Canada has done in terms of internationalization is very progressive in addressing specific populations. It’s something you can market about Canada, but because of that it becomes a focal point, and I could see that sometimes creating resistance in the community,” Jones says. “But how do you address that? You have to educate the public on what the benefit is.”