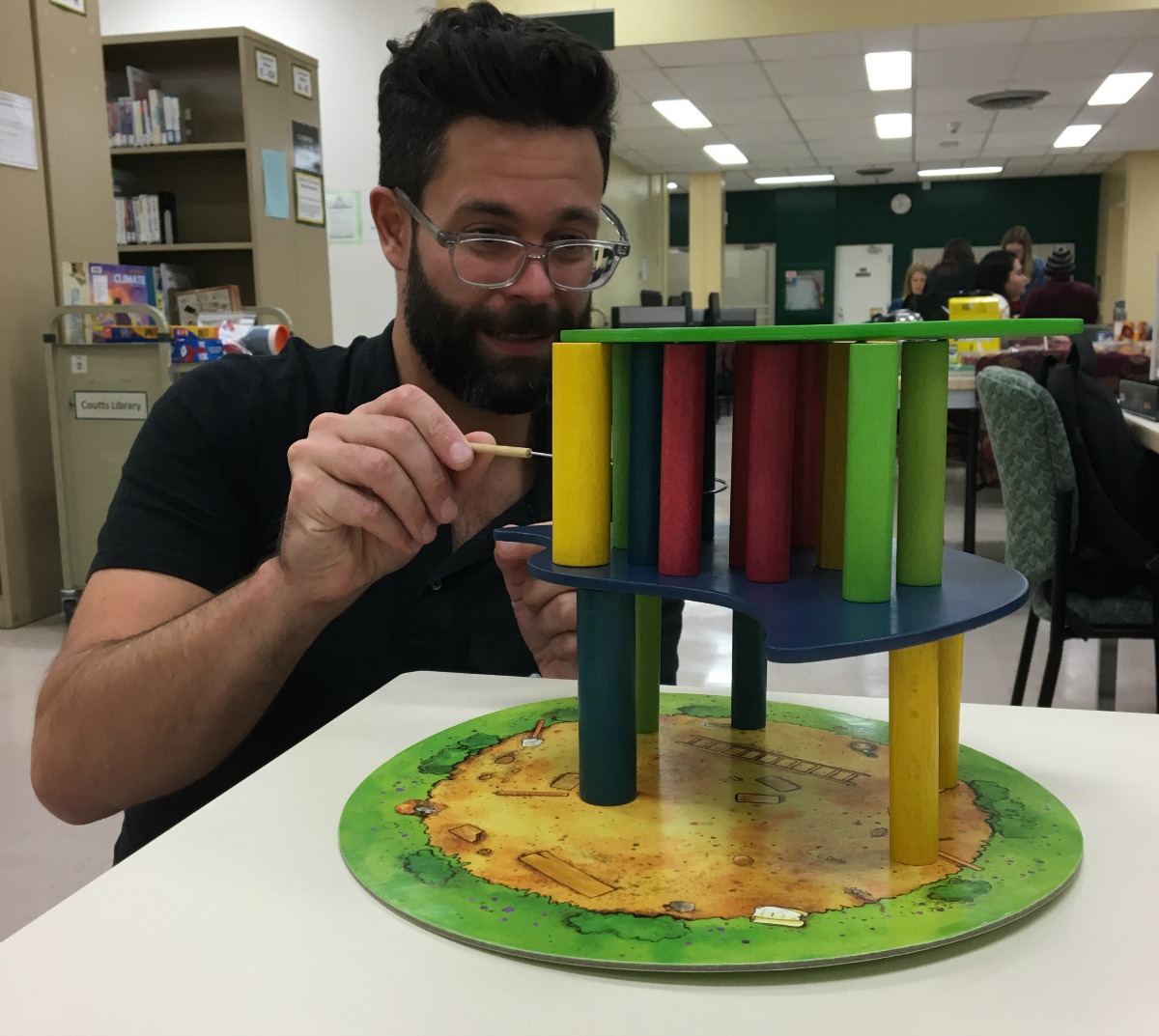 Board games that teach

Just in time for Christmas, education researchers Janelle McFeetors and Marc Higgins pick a few of the board games they’ve found to camouflage foundational STEM concepts in good old-fashioned fun.

Equilibrio: Players employ spatial reasoning to build three-dimensional towers from two-dimensional illustrations. “It’s easy when you’re looking at the figure face on, but it gets trickier when the perspective changes,” said McFeetors. “Kids quite naturally apply what they learn about geometry in math class to how they analyze and build their towers.”

Evolution: Natural selection is put in the hands of players as they draw on more than 4,000 traits to evolve their species in an effort to survive and thrive. This multiple award-winner was featured in the prestigious science journal Nature.

Gobblet Gobblers and Tic Stac Toe: Both games explore basic strategy and logical thinking through three-dimensional variations on tic tac toe. “What’s amazing is that Gobblet Gobblers is so easy you could use it in a kindergarten, but I’ve seen adults who are completely drawn to play the game,” McFeetors said. “Parents can actually authentically engage with their kids playing this game.”

Leaving Earth: Players are placed in the roles of space agency directors amidst the race to space. Research and design multi-stage rockets that will safely and cheaply break orbit and get an astronaut to the moon and back—preferably do so before other agencies do! “It’s a great contextual introduction to the history of space exploration as well as concepts such as mass, impulse and the relation between them,” Higgins said.

Santorini: The island of Santorini is the field of play where competitors try to build the tallest domed structures, with various Greek gods interceding to help or hamper the completion of their projects. McFeetors likens the game to chess but with a board that evolves as the game progresses, putting players’ spatial reasoning and strategic thinking to the test.

Zendo: Inductive reasoning and pattern recognition underlie the skills needed to discern the secret rules that dictate how colourful geometric figures are used to build different structures, much akin to how scientists systematically test hypotheses through empirical experimentation.

Two University of Alberta education researchers are exploring how popular board games can help classroom teachers impart mathematical and scientific concepts to students. And they say the potential benefits of gameplay in class don’t end there.

“There are these games that directly target a lot of the expectations that are in the Alberta Education Programs of Study, and they do so in different ways,” said Marc Higgins, a professor in the Department of Secondary Education. “We should offer as many entry points as possible to honour the different ways of thinking that students bring with them into the classroom.”

Prior to entering academia, Marc Higgins and co-researcher Janelle McFeetors were high school teachers who, independent of one another, decided to try using board games to break up the routine of math and science instruction with something more interactive. As colleagues in the Faculty of Education, they’re looking at how board games can engage students in new ways, strengthen classroom relationships and create opportunities for parents to continue conversations about math and science at home.

But it’s not enough to set up the board and let students roll the dice. Teachers need to be prepared to reveal the mathematical and scientific underpinnings to the fun, going beyond operations with numbers to spatial reasoning, inductive logic and experimental method.

“It’s not just about the play, it’s awareness of what they’re doing while they’re playing,” McFeetors said. “That’s how we’ve been working with this theoretical framework, stretching what it means to learn. We need to give our preservice teachers and students opportunities to realize ‘that was a mathematical moment; when I develop good strategies that’s good math.’”

The researchers do their work both in classrooms, where they have students play in teams to enable them to articulate aloud to their partners the reasoning behind a particular move in a given game, and with preservice teachers, to demonstrate the potential for board games to enhance STEM teaching.

Gathering around the game table

Higgins said that the joy inherent in game play can help attenuate performance anxiety for pupils and educators alike by allowing players to practice their skills without being evaluated.

“Math phobia is a real thing, not just for students but for teachers. To have a low-stakes environment to explore math problems without an actual solution is not a bad thing,” he said. “That can be a rich space to develop a bit of mathematical stamina.”

He added that games offer students who might be uncomfortable speaking up in class another way to become participants.

“In the same way a book needs a reader to activate it, a game needs players around the table. It’s a very social medium,” Higgins said. “For learners who might not be as socially fluent as others in a classroom, to have a pre-established set of rules through which they might engage with one another sometimes reduces the anxiety of that social interaction.”

The focus on board games as vehicles for learning comes at a time when the popularity of board games is high, with online communities like BoardGameGeek.com attracting upward of a million registered users and board game cafes popping up all over the map. McFeetors said she now hears about junior highs offering optional classes where students design and play their own board games.

“We think it’s important to be conversation partners with teachers, so they’re really intentional about using games in the classroom, and that students are learning through their playing,” she said.

Since contemporary board games tend to be pricey, McFeetors and Higgins have asked the Herbert T. Coutts Library to lay in a stock of games and have started hosting game nights there to give bachelor of education students a chance to give them a try. While learning about board games’ potential to impart fundamental math and science concepts, participants also get to experience the function that board games have mediated throughout human history.

“We come to school to learn together and to learn how to be together,” McFeetors said. “I tell my preservice teachers that math is an excuse to come together to learn something, but it really is about the coming together, so that’s something that games provide too.”