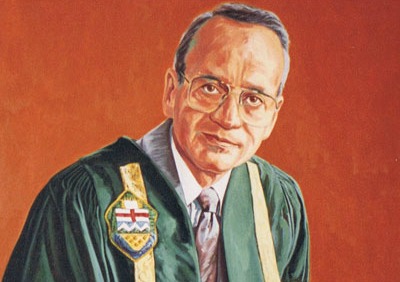 He was a master’s student in Education Administration (now Educational Policy Studies) who became chair of Elementary Education, the fourth dean of education (1972-75) and the University of Alberta’s vice-president before becoming the only member of the Faculty of Education to hold the campus’s highest office (1979-89). It’s fair to say Dr. Myer Horowitz has a uniquely intimate relationship with this institution.

A tireless advocate for education and students throughout his tenure and into retirement, Horowitz reflects on the significance of the 75th anniversary of the Faculty of Education, the importance of leadership in education and the impact of his own mentors.

illuminate: What are your thoughts on seeing the UAlberta Faculty of Education mark its 75th anniversary?

Myer Horowitz: It’s a great milestone. One of the reasons why I would put importance on it is because while I was president the U of A celebrated its 75th anniversary. Some people might think, “What’s the big deal with 75 years? It’s not like it’s 100.” For us it was important and a happy experience.

I suppose it’s the elementary school teacher in me who once taught arithmetic, but it underlines for me how young the faculty was when I first came to Alberta from Montreal to do my master’s degree. My wife and I came out in 1958 when the faculty was only 16 years old.

It’s important to recognize that universities were involved in teacher education before the change from teachers’ colleges and normal schools to full-blooded university faculties. It’s one thing to jump for joy and say, “We’re 75 years old!” On the other hand, the University of Alberta has been involved in teacher education for much longer. It’s because of its earlier involvement that the university moved in that direction.

“ “It may sound overly simple, but it’s important to try to understand other people—what motivates them, what concerns them—to be as good a listener as possible and to be supportive. There’s no shortcut.”

Your relationship with the University of Alberta started when you were a master’s student in Education Administration. What kind of impact did that have on you as a teacher and an administrator?

It had impact not only in relation to my time as a master’s student, but my contacts with the university were totally responsible for helping me get to Stanford for my doctorate. My experiences during my master’s affected everything else I ever did. No question about it.

I think a lot had to do with the age of the institution. Youth can be an advantage, even though it is important to accumulate all kinds of valuable experiences. There was a certain vibrancy at that time. As an administrator, it became more and more difficult to duplicate what I felt and experienced as a student, which I considered to be very, very positive.

I feel so fortunate that I was able to interact with Dean Herbert Coutts. He came into our classes occasionally. He delivered seminars on topics of interest to him. As time went on, [Horowitz’s supervisor and Chair of the Department] Art Reeves suggested that the Dean would be interested in being on my supervisory committee for my master’s.

Ten years later, Dean Coutts approached me to be a candidate for a faculty position that was becoming vacant (Chair of Elementary Education). Being one of the few people who served as chair with him as Dean and succeeding him as Dean of Education, the relationship continued.

What was your relationship with Dean Coutts like on a day-to-day basis?

He frightened you to death initially, and not just because he was the Dean, which could be quite frightening to a student. As a student, it was easy to mistake him being serious about important matters as overly severe and distant, but you couldn't find a sweeter, more caring and more concerned individual. It was a matter of pushing aside the misperceptions because he was extremely warm, caring and helpful. It was great.

I think he applauded the differences between us. It wasn’t that he felt that I was a clone of him, but I learned a lot from him. A lot of years have gone by now, but a lot of the good things that occurred at the university in my time occurred because of him. He set the stage.

I’ve filled a number of different administrative roles and when I reflect on all of that, it can be tricky, complicated to follow someone, especially someone who is strong. Having said that, no one could have had a better connection with a predecessor than I had, thanks to Dean Coutts. I know it sounds dreadfully positive and romantic, but it was. I’m much happier reflecting on him than I am on myself.

What advice do you have for teachers and teacher educators for mentoring the next generation?

I don’t think there are any rules. It has to develop naturally and it develops differently with different people. It may sound overly simple, but it’s important to try to understand other people—what motivates them, what concerns them—to be as good a listener as possible and to be supportive. There’s no shortcut.

Just be yourself. Listen carefully. Don’t put everyone in the same box. Recognize what makes an individual an individual. Start slowly. Nothing earth-shaking or overly profound—just easy stuff that we often neglect.