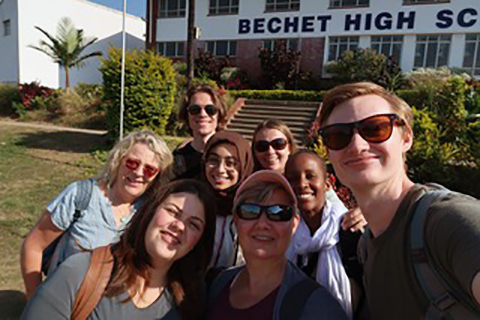 As part of an ongoing series, we ask some of our Faculty of Education professors and alumni to tell us what they’re doing during the summer (spoiler alert: they’re keeping busy). Read Part One, Part Two, and Part Three.

This summer a group of students, a co-instructor and I went to the other side of the globe for an immersive educational experience about the intersection of social justice and the performing arts.

Before we departed for Durban, South Africa, the course began with one week in Edmonton to learn about community-based theatre facilitation strategies, and the political and community theatre histories of South Africa. Students gained awareness about the apartheid regime and compared it with Canada’s colonial history in relation to Indigenous peoples. It is a little acknowledged fact that Canada’s Indian Act, including practices such as forced removals to reserves and the pass system, was a model for South Africa’s apartheid policies.

Once in South Africa, students gained firsthand understanding of the ongoing social challenges around race and the economic disparities still existing in the country 24 years after the overturning of apartheid. In Durban, for example, we stayed in a beautiful Airbnb with a swimming pool, hot tub and housekeeper, surrounded by a 15-foot wall topped with spikes and an electric fence. Some experienced what it means to be a member of racial minority for the first time. As student Racquel reflected, “for the first time in my life I am feeling what it is like to be judged immediately based on the colour of my skin.”

For one week we joined the Indra Congress, held at the University of KwaZulu Natal. The Congress is a network of youth theatre groups working on topics of conflict resolution and reconciliation, coming together from all over the world for an exchange. Our students participated with and took opportunities to facilitate activities for youth from across South Africa, as well as youth from Namibia, India, Palestine and the United Kingdom. The youths’ performances depicting the challenges they face in their home countries put the challenges faced by Canadian students into perspective. The young women from India shared their struggle for the rights of girls. The Palestinian youth told of the obstacles they face to moving freely within their own cities. The South African youth explored their multi-layered experiences of socio-economic oppression including gender-based violence and the barriers to education. Our students presented a metaphorical piece on the process of colonization.

As well as attending the Congress, we visited with other South African youth theatre groups in the Durban and Cape Town areas including Makukhanye Art Room, a shack theatre in Khayelitsha, South Africa’s second largest township. We were consistently awed by the vivacious music and dancing of the South African youth and artists.

In our time off we went on a little safari to Hluhluwe Imfolozi Game Reserve and St. Lucia Estuary to learn about the local flora and fauna. We saw plenty of elephants, rhinos, hippos, crocodile, zebras, antelope, buffalo, monkeys, giraffe and even a lion.

It was an awesome intercultural learning experience.