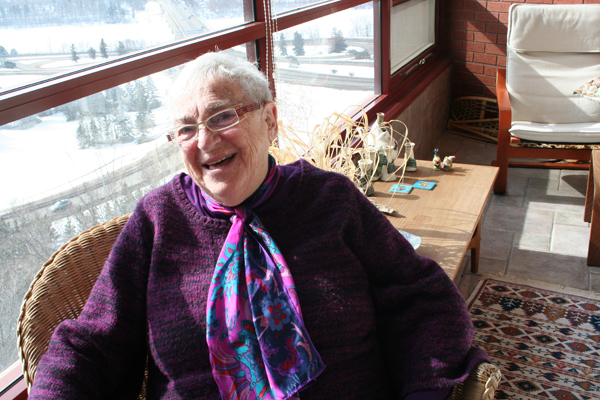 At first glance, Dr. Joy-Ruth Mickelson’s, ’79 BEd ’83 MEd ’95 PhD, home looks perfectly typical, with its 1960s teak chairs and tables, house plants, photos of children and grandchildren. But, if you pay attention, you’ll see hints of an unconventional life: bookshelves filled with everything from Jewish history to local poetry to the peace movement to Mickelson’s own PhD thesis, completed at age 65; a slick Macbook beside a printed manuscript of her autobiography; a hand-painted, batik tapestry from Tanzania. We sit and eat seedy thumb-print cookies with a dollop of jam on top – a Passover treat baked by her husband.

“Joy-Ruth embodies an incredible strength of character that, in my opinion, is borne of rich life experience, an uncanny ability to listen before making assumptions, and a work ethic that has led to a broad and deep understanding of educational research. She is a committed scholar, who has gentle but ironclad commitment to talking scholarship into the world to make peoples’ lives healthier, stronger, and more loving. What better could be said about any member of the academy; Dr Mickelson will always have my personal admiration!”
-Dr. Fern Snart, Dean, Faculty of Education

“In a world, and specifically in an academic community, where people seem bent on having the loudest voice shouting out all the ‘right’ answers, her attentiveness, curiosity and love of life is delightful and very healing to be around.”
– Sulya Fenichel, Graduate Student

“There are people who enter and depart from one’s life without leaving much of an imprint. Joy-Ruth is not such a person. Though my time spent with Joy-Ruth has been limited…I feel so very privileged to have listened to her speak.”
Jinny Menon, Graduate Student

“She often invited me and my husband to her home when we missed our family because we were away from our home country and were studying at the U of A. She cooked her own cultural food, listened to our stories, became our friend and treated us as if we were her own daughter and son."
Ji-Sook Yeom, Vice President for Admissions and Public Relations, Konkuk University

An adjunct professor in the Centre for Research in Teacher Education and Development in the Department of Elementary Education, Mickelson loves telling stories about the past but dislikes describing her accomplishments. And yet, as she speaks of her life, they are impossible to conceal. During her 84 years, Mickelson has always done things a little bit differently and accomplished more than most.

Her teaching career began early. Born and raised in London, England, she began teaching students a famous progressive boarding school in the UK. Just 21 when she began, Mickelson’s students, 12-18 years of age, weren’t much younger. But as much as she loved the culture of the boarding school, where students directed their own learning, she decided she couldn’t stay. “A lot of the kids asked me, ‘Why did you leave? You loved it so much.’ I left because it was a bit like lotus land. I thought I had to face up to things a bit more.”

So, in the mid-1950s, Mickelson decided to pursue a post-graduate social work diploma at Liverpool University. Teaching art seemed “selfish,” she says; working as a social worker seemed a better way to contribute. As a child growing up during WWII, Mickelson was among thousands of city kids in Britain relocated to the country to avoid the German air raids. But ironically, while the country was fighting Hitler, Jewish children within Britain were often rejected by racist foster families. As a result, Mickelson lived with 17 different families. As a social worker, she figured she could help make the displacement less traumatic for foster children.

A final paper for her graduate program led her to the Middle East. For months, she lived on a kibbutz, doing farm work, studying Hebrew and squeezing in some academic work as well. That’s when she met and fell in love with an Edmonton man, and together, they backpacked around the world together, much to the chagrin of her father: “I was a bit of a free spirit.”

After marrying her husband, Mickelson moved to Edmonton and, while raising three children, she worked as a teacher. But while she’d already completed graduate studies in the UK, the province didn’t recognize her education and Mickelson found herself at university again, earning a Bachelor of Education in 1979 and a Master’s in Educational Psychology in 1983, both at the U of A. After completing her master’s, Mickelson worked as a chartered psychologist, mainly for Edmonton Public Schools.

It was a rich and satisfying career, she says, but as she approached retirement age, Mickelson had no desire to slow down. Instead, she opted to redirect her energy toward something new: a PhD in educational psychology at the U of A. Her thesis topic: so-called “behavioural disordered” boys.

“One of the principals I’d worked with in the school system had said, ‘Find me a behavioural disordered kid, and I’ll find you a behavioural disordered mum. The apple doesn’t fall far from the tree.’ That made me so cross, saying something so disrespectful and so awful,” she says. “I wanted to prove that the apple can fall far from the tree: it can fall here, it can fall there, and it can fall in the middle. So, I thought I’d write a dissertation on hearing mothers’ voices. It was about seeing their sons through their eyes.” The result of her efforts was a thesis called “Our sons are labeled behaviour disordered,” which was completed in 1995 and published as a book in 2000. Recently, it was translated into Korean.

Joy-Ruth was the first doctoral student in Educational Psychology to complete her dissertation using narrative inquiry, a form of qualitative research that focuses on understanding and conveying human experiences. It was something that left a lasting impression on Dr. Janice Huber, then a graduate student and teacher. “When I read Joy-Ruth’s work, I really saw the pain in mothers as a result of what was happening with their sons,” she says, adding that the book reminded her of the complexity of classroom challenges. Over the years, the two became both academic colleagues and friends: “I think Joy-Ruth has such a beautiful way of being able to wonder.”

Endowed by Friends of Joy-Ruth Mickelson

Eligibility: Awarded to an outstanding doctoral student in teacher education. Must be in their first or second year of their doctoral program. Must be involved in research for teacher education. Awarded each year there is a deserving recipient; there may be years when no award is given. The student will be a participant in the Centre for Research for Teacher Education and Development (CRTED).

Application: Eligible students should submit a copy of their current CV and a letter saying why they feel they are worthy of such an award.

Deadline: May 1st For further information on this scholarship, please click here.

While she didn’t complete a PhD with the hope of beginning a traditional academic career, Mickelson was keen on conducting research, which she did for almost a decade. One of the research projects she contributed to was led by Dr. Myer Horowitz, former U of A professor and the university’s ninth president. Later, she became involved in “Research Issues,” a weekly gathering at the Centre for Teacher Education (CRTED) for graduate students and faculty, created by Horowitz and Dr. Jean Clandinin. The group’s modus operandi: communicating about research via oral presentations and the written word. “Because of who she is, her maturity, her experience, her passion, her humour, she really became a leader within the centre,” Horowitz says.

Even now, at 84, Mickelson still makes the occasional appearance at Research Issues, where she advises graduate students and reads her own poetry to the group, when it pertains to topics of discussion. “She has an incredible command of the English language,” says U of A professor Dr. Claire Desrochers, who has known Mickelson since the mid-90s. But even more than her gentle nature and willingness to help, Desrochers is impressed with her commitment to learning. “She really is a wonderful example of a life-long learner.”