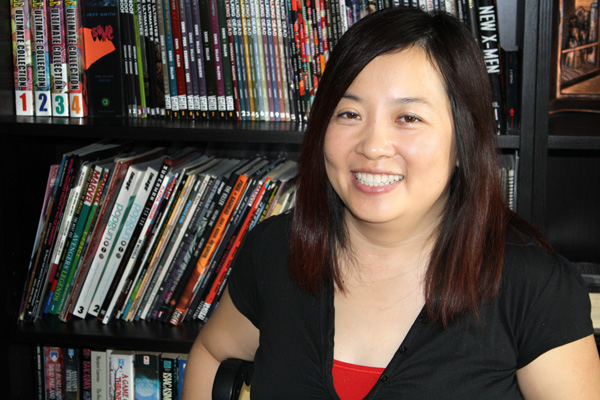 Kuen Tang, '06 BEd,  is a self-described “proud geek chick,” who loves comic books and admits she likes to talk a lot.

The gift of gab bodes well for her considering she’s on a major mission to inspire quadriplegics to do more and be more, while changing the world’s perception of people with disabilities.

In two years she’ll show heli-skiing a thing or two about perseverance.

“My plan is to try every sport in the world, and I don’t believe there are any I can’t figure out how to do,” Kuen says with calm confidence.

Kuen became the first quadriplegic to reach the summit of Ha Ling Peak in Canmore, Alta. and to ski in the Birkebeiner, an annual cross-country ski event in Edmonton.

Beyond the sporting arena, she was the first female quadriplegic to graduate with a BEd in elementary education from U of A and the first quadriplegic to letter for DC Comics—letterers add dialogue, sound effects and word balloons to complement artwork and bring the story to life. She also created the world’s first video resource for women with spinal cord injury.

“After my accident I found my direction in life,” says Kuen. “Before that it was all about what I wanted. Now I have so much to give back. I live every day like it’s my last.”

Because her accident sparked such a tremendous philosophical shift in thinking, the 34 year old now celebrates her car accident day (Aug. 31, 2001) as if it were her first day. And she’s more than ready to embrace life as an exuberant 12 year old!

As a coordinator with the Canadian Paraplegic Association, she had the privilege of working directly with individuals to help them overcome challenges of living with disabilities. Now that she works in document control at Worley Parsons, she’s more than happy to deliver courses to staff on bias awareness and diversity inclusion. Her position as VP Education of Worley Parsons’ Toastmasters club provides another outlet to discuss disabilities in the workplace.

Kuen says she’s honoured to win the Alumni Horizon Award because it confirms she’s moving in the right direction.

“The recognition helps my cause,” says Kuen. “This award isn’t only for me; it helps everybody in the community move forward.”

Though accessibility initially kept her away from the classroom, Kuen hasn’t lost sight of teaching—she’ll get to that in about 10 years, after she’s transformed the world’s view of people with disabilities.

Up next, Kuen will assemble a dream team of international artists to help her develop a graphic novel based on her comic strip about disability issues.

She’d like to see this comic book distributed to classrooms around the world while securing a spot on the Amazon bestsellers list. She also plans to become a Distinguished Toastmaster, land her own TV show, earn a legit Wikipedia entry, participate in TED Talks and become the first female quadriplegic NASCAR driver.

And why should it? After all, she’s only 12—she has plenty of time to make it happen.