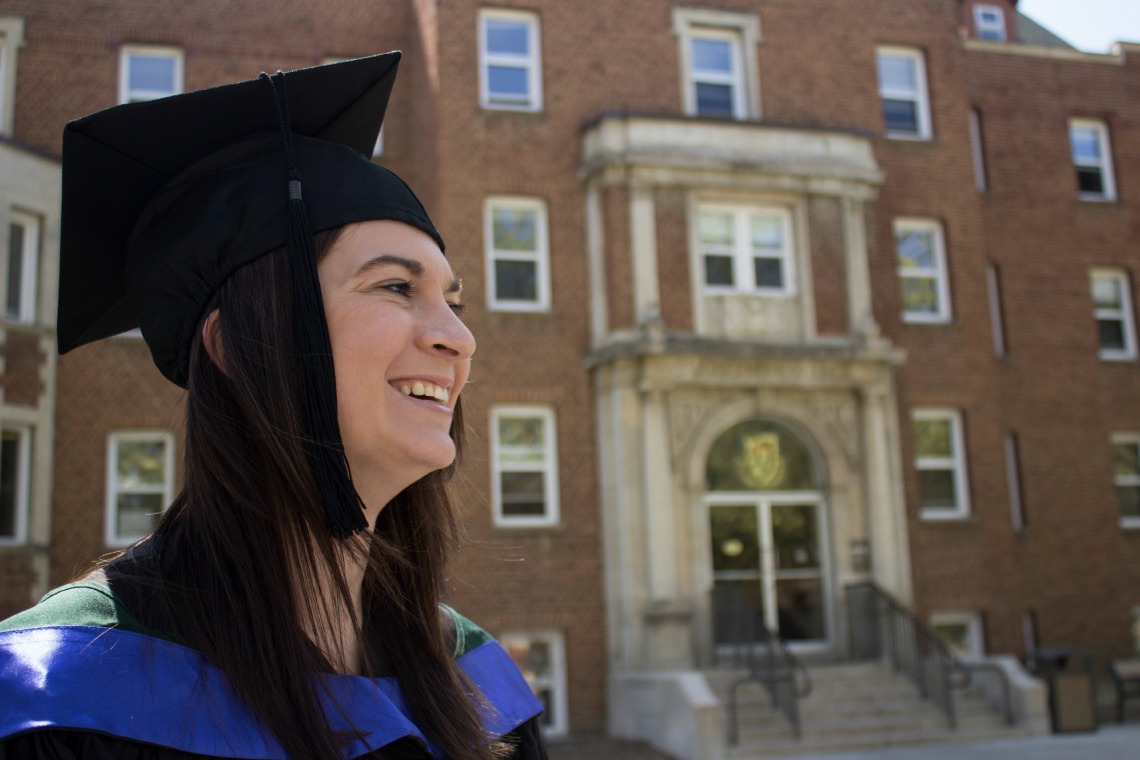 After a long road on her own out of poverty, Bachelor of Education student Amanda Beekman is “beyond excited” to be graduating from the University of Alberta.

With a sometimes part-time class schedule, in combination with international aid projects building houses in Mexico and visiting orphanages in Guatemala--and some breaks for travel to India, Africa, Laos, Thailand, and Vietnam--Amanda has already had a good taste of ‘real life’. But as a result, the usual four-year education degree has taken more time.

“I have been working towards this moment for 10 years,” says Amanda. “I have been taking classes for years, while working three jobs.” Her personal drive is remarkable, but she recognizes that she has had a lot of support from friends along the way.

Forging her own path

Amanda was raised in Edmonton, in a poor family. “My family wasn’t big on school. They never encouraged me to even finish high school, never mind go to university,” she says.

She is the first person in her family to graduate high school and do any post-secondary education, so graduating with a professional degree is a true accomplishment.

“I was in high school when I realized that I didn’t want my family to end up in poverty as well, and I knew that getting an education would break me out of that.”

Amanda’s first steps included two years of upgrading at Centre High. “After I graduated high school, I knew that I wanted to go further, that I needed to change the future for my family.”

“I graduated 10 years ago and have been plugging along. It is a triumph,” she says. “School has always been really hard for me.”

Inspired to travel the world

Like many people, Amanda didn’t immediately know what her vocation would be, so she took some time to travel and explore.

“I lived in Tijuana for a year building houses, and I’ve done a lot of travelling since then, trying to figure out what it was I wanted to specialize in. I wasn’t sure that education was the right field for me, but I always knew I wanted to work with children.”

Torn between working in the medical field or in education, Amanda hedged her bets at first. “It was a toss up between education and nursing--so I took classes in both.” She was drawn to these fields due to her experiences abroad in developing countries.

“I did all of my pre-requisites for a nursing after-degree as my electives for my education degree. I knew I wanted to focus on overseas work, and there is a need for nursing and teaching, so I know that if I have both I will be most effective.”

While working on her degree in education, with her sights on simply getting through, a friend recommended an International Service Learning class through St. Joseph’s College.

“I went to Guatemala with Brittney White’s International Service Learning class, to work at an HIV orphanage. It gave me a new perspective on the world,” says Amanda. Even though she had travelled extensively and had been inspired to tackle issues such as slavery, poverty and the sex trade, the course focused on individual development as well as community service. Students had the opportunity to reflect on situations in a personal and critical way.

“It has really made me take a wider perspective on what I see in the world. I have learned to process and think and not immediately react.”

Brittney White, director of the Campus Ministry and sessional instructor, inspired Amanda to think big picture and work to finish her education so that she could have a greater impact. Most importantly, White spoke from the heart.

Amanda has a nose for honesty. She knew immediately that White was passionate and “everything she would say was coming from experience.”

White is active in social justice causes here in Edmonton. She has taken students to the Edmonton Institution, and she hosts an “art night” for at-risk youth at St. Joseph’s on campus. “She really taught me that I should start with what can I do in the school and the community I live in, and then start outreach from there,” says Amanda.

Amanda feels that her mentor White has given her lessons not only in the practical aspects of social justice but also in sharing your heart with people in need.

“She is always encouraging me. She saw that I had had a hard life, and she encouraged me, pushed me. At first she was a professor, but became a friend.”

For her part, White is flattered that Amanda was affected by her at all. “When she took my first class, she was very standoffish and closed,” says White. “But I kept at her, pushing her, and eventually she opened up.”

“Amanda has a humble confidence that I really admire. She is a unique student, in a unique situation and is amazingly resilient.” White notes that she always found it funny that Amanda would be concerned about her grades, but was always an ‘A’ student.

“Amanda has a lot of life experience that adds depth to her academic work. In her papers she ‘walks the talk’ and has a good balance of qualitative and quantitative evidence,” says White.

Because Amanda already had extensive travel experience under her belt, White was glad to have the student along on the trips to Guatemala. “She is a real leader among her peers. Whenever some little thing would go wrong, she was able to calm them down, and she somehow always had a story about something that happened to her that was much worse!” says White. “I know that Amanda will do amazing things.”

Amanda has lined up an exciting new adventure, over the ocean and into the classroom. “I’m moving to Cambodia in August. I start on August 3rd at an international school that teaches the Alberta curriculum.”

Not one to stand still, Amanda was hired on the same day that she met recruiters and interviewed for the job.

“It feels like a dream. It was a long process. It felt like the end was never coming, until I hit that interview,” she explains. “I was hired that night. The contract was in front of me, and I was like ‘What? You think I’m going to graduate?’” she laughs.

Amanda agreed to a two-year contract at a new International School in Phnom Penh that uses the Alberta curriculum, so that her experience will count towards a permanent teaching certificate here in Alberta.

“After being in school for so many years, it will be weird to be the one in front of the classroom. My AFX [advanced field experience] was the hardest thing I’ve ever done. But I did it. I persevered.”

With connections already made with friends of friends, Amanda is planning on making an impact. “I’m excited to be a teacher, but also a person that will make a difference in the community.” She has started to explore opportunities for volunteering on social justice issues.

“Having an education is such a miracle for me. This is a big deal. And it probably won’t hit me until I am crossing the stage... There are many places in the world where you just can’t get an education. So many people don’t have this privilege. In the future, maybe I’ll come back and get my nursing degree. I’m trying to think big, but not too big!”