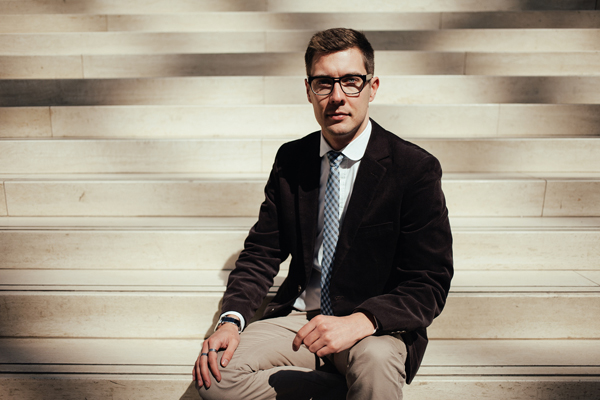 In one night, you can learn about robotics, edmontosaurs and the morphology of zebrafish without having to flip through the science channels on your television. While coincidentally the motto behind Nerd Nite is “It’s like the Discovery Channel with Beer,” the events offer much more than you’d expect from a night in front of the tube, sipping a Molson’s.

It’s a global phenomenon that started in Boston in 2003, spreading to more than 60 cities around the world. Last year, Wade Kelly, '04 BEd, '12 MEd, who now works in the Faculty of Extension, brought Nerd Nite to Edmonton. He enlisted the help of Adam Rozenhart, '04 BA,  and the two friends now host the events at the Citadel.

It went from being an event with about 60 people in attendance to at least double. But Kelly says the most amazing part is seeing adults totally engaged in new topics—seeing art people reconnecting with topics related to science and vice versa.

Kelly works as an instructional designer, where he helps new instructors develop courses and teaching strategies at the University of Alberta. So, it makes sense that he’s so thrilled to see adults engaged in learning about obscure topics. “We have the Internet at our fingertips and all this information is available; it’s all there. But people want to connect. They want to be social. They want to be excited and inspired, and that’s what Nerd Nite does,” says Kelly.

Kelly is full of stories demonstrating how Nerd Nite inspires those who attend. When Ted Bishop, writer of The Social Life of Ink, gave people the chance to crush gall nuts, thus making the same ink used for the Dead Sea Scrolls, people wanted to write their names using this historical ink. He also brought in acid free paper and fountain pens, and Kelly says Bishop was bombarded with excited people wanting to buy the pens from him.

Nerd Nites have been so successful on an international scale that this year marked the first Nerd Nite Global Festival in New York and one of the presenters was from Edmonton. After Lianne McTavish spoke at an Edmonton Nerd Nite, Kelly nominated her for Nerd Nite Global. At the festival, she spoke about her experience as a professional body builder and how it contributed to her own professional research as an art history professor.

Kelly and Rozenhart have built a community of nerds, which really just means they’ve created a network of people—both those who attend, and those who present (aka alum-nerds)—who are really interested in the world around them. “There are a number of Nerd Nite fans who just buy their tickets and don’t even look at what’s going to be featured. And I think that’s beautiful; they just want to be inspired by new ideas and be exposed to new thoughts,” says Kelly.

Tickets are often sold out in the days leading up to the talks, which just shows that being a nerd is no longer a bad thing—maybe, the best revenge is not just living well, but learning well, too.