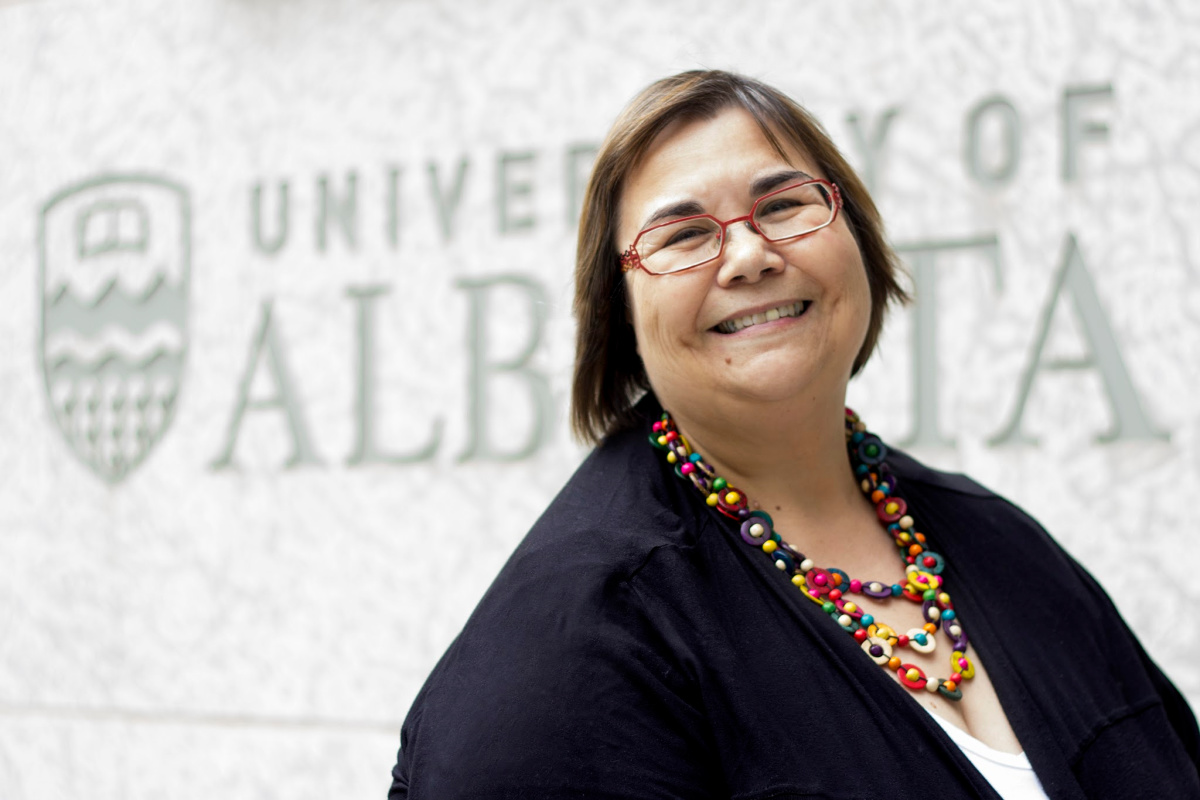 Marilyn Shaw had already been teaching Cree to K-12 students in her home community of Cadotte Lake, Alberta for more than a decade when her principal encouraged her to pursue her Community Linguist Certificate (CLC) through the Canadian Indigenous Languages and Literacy Development Institute (CILLDI) based at the University of Alberta.

For Shaw, whose first language is Cree, the Community Linguist Certificate program was not only an opportunity to enhance and affirm her abilities, but also improved her credentials as an educational practitioner.

“I was able to put that in my resume, and it helped me to be more recognized and stable in the work I was doing as a Cree language instructor,” she said. “It encouraged me, and it gave me confidence that I was doing right in what I was doing in the classroom.”

Now, one of two pathways to teacher certification supported by Alberta Education will enable Community Linguist Certificate holders like Shaw to access financial support to help them pursue a Bachelor of Education degree.

“These projects correspond to the Truth and Reconciliation Commission’s Calls to Action regarding the preservation of Indigenous languages, as well as engaging with Indigenous knowledges and teaching methods in Alberta classrooms,” said Florence Glanfield, Vice-Provost (Indigenous Programming and Research).

“Providing these pathways means more Indigenous language speakers will be certified to teach in their communities and in the provincial school systems.”

Shaw said that obtaining her BEd will open up more employment opportunities for her while allowing her to contribute even more to her community and to the preservation of her language.

“A lot of First Nations are wanting to revitalize their language because they are losing language speakers,” Shaw said. “Because I’m a fluent Cree speaker, I can help out in a lot of areas — I can teach, I can interpret, I can do a lot of things that are needed to help revitalize the language. With my Bachelor of Education and the CLC and being fluent in my language, I would be an asset to the school and the community, I believe.”

The second bridging pathway under development, also supported by Alberta Education, is based on a unique Memorandum of Relational Understanding (MORU) between the University of Alberta and Yellowhead Tribal College. Under the MORU, Yellowhead Tribal College will work with Elders and knowledge keepers to develop an assessment process that enables fluent speakers of Anishinaabe, Cree, Nakota-Sioux and potentially Dënesųłiné to gain credit in the University of Alberta’s Secondary Education program without prior certification or post-secondary credentials.

Diana Steinhauer, president of Yellowhead Tribal College, said the MORU affirms existing treaty relationships and the nations’ and people’s ownership and responsibility for their languages.

“Our languages are verb-based, they have the capacity to understand and describe the spirit, the energy that moves through the universe, and they’re also tied to the land,” Steinhauer said. “Languages are given to us by our Creator, so we have a role and a responsibility that we take seriously.”

Steinhauer, whose doctoral work was in adult language acquisition, is leading the development of an assessment tool and its application that recognizes the way cultural knowledge is embedded in Indigenous languages. She said consultations with Elders and knowledge keepers have yielded a first draft, and that the final version of the tool should be completed by summer of 2020.

“Indigenous Elders are identified as the legitimate authority for their nation's and people's languages, so this project is a step in the right direction to fast-track future Indigenous language teachers in this province,” Steinhauer said.

Glanfield said she’s grateful for the relationship with Yellowhead Tribal College and for their leadership on this project.