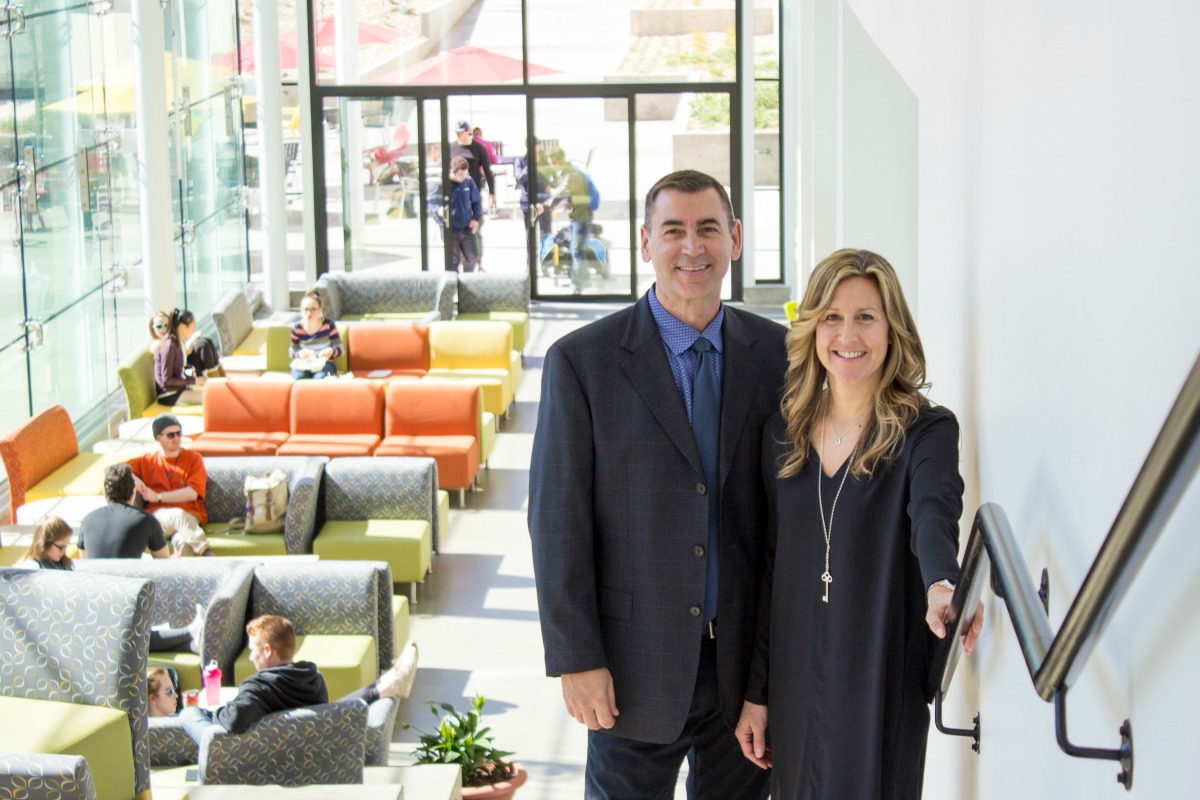 When Dan (BEd ‘87) and Carla Cavanagh (BEd ‘94) purchased Delmar College of Hair and Esthetics in Calgary in 2010, the numbers were promising.

It was a thriving business, and the husband and wife team were excited about the prospect of owning a company that required many of the skills they’d honed over several years as educators.

But within days, Dan—who had moved from Edmonton to Calgary ahead of Carla—realized that they were also in for an inordinate amount of work. The school was doing well financially, but that wasn’t what concerned Dan the most.

He wanted the students to get the best education possible in their field, and he wanted the instructors to be passionate and engaged. And at the beginning, those goals were not being met—students were not getting the most from their classes, and many teachers were complacent.

“I went back to basics right out of the gate. I said, ‘Okay, let’s have a lot of collaboration and rich dialogue about what is our mission.’ And we set our mission and our vision, our values and goals,” says Dan.

Those values and goals all revolved around education; they wanted to provide the best way for students to gain knowledge, passion and really be prepared when they left the college. Dan started out with the same mindset he would have as a principal coming into a new school. And Carla, who had worked as a teacher for years, was also able to use her skills as an educator to make improvements.

“I definitely think because we come from education, we have a different focus. We still have that inherent desire to make sure the students get the best education they can,” says Carla.

Neither Dan nor Carla had a background in esthetics, but they wanted to learn as much as they could about the industry right from the start. Dan joined the American Association of Cosmetology Schools (AACS) because he knew they were the largest organization in North America dealing with cosmetology, and it would help him learn the players of the industry.

He then became a chair of the Career Educators Alliance, an umbrella organization under AACS, and went on to teach master educator classes throughout the United States for a couple of years, sharing his teaching skills with other educators while also running Delmar.

Although Dan had previous business experience—he started his own aerial photography business specializing in commercial real estate photography and took a year off from education to sell airplanes for a company in Calgary—the award-winning educator believes that his background in education is what really helped when it came to improving Delmar. Dan graduated from the University of Alberta with a bachelor of education in 1987 and went on to receive a master’s degree in educational administration from the University of Portland. He taught until 1996, was an assistant principal, and then a principal while also lecturing at Concordia University of Edmonton in the area of integrating technology for teachers.

So, when Dan came home one day and asked Carla what she thought about potentially buying a hair school, she wasn’t surprised.

“You have to know Dan,” she says. “He would always come home with these ideas: ‘What about this? What about that?’ Then, all of a sudden, we’re going to visit Calgary, and I was like, ‘Are we actually doing this?’ I thought he was completely crazy. Both of us took a year’s leave, because we didn’t know what to expect.”

The Cavanaghs took a critical look at the lesson plans and the way things were being organized. They wanted to change how they attracted prospective students and how they engaged and retained current students.

They hired a marketing company to determine what types of students were interested in the program, which resulted in an updated website and a better understanding of the types of classes they should offer at Delmar. Over time, the college started offering classes three days a week instead of five, to accommodate a large number of students that continued working full time. Dan and Carla also decided to diversify the program beyond the initial focus on hairstyling, offering courses in nail treatments and medical esthetics, among others.

When he first came to Delmar, Dan also noted a gap in training which resulted in students often being unprepared when they reached the floor and had to deal with clients. To address that gap, the college partnered with Nuts & Bolts Training Company out of San Diego, which helps beauty schools to better train their students. The partnership has resulted in 20 modules in which students acquire management and leadership skills and learn about owning their own salon or spa.

Staying focused on the big picture

As part of their review of the college, the couple also spent time with Delmar’s instructors. Within two years, the staff was nearly completely overhauled.

“For some of them, it was about a paycheque, and not about engaging students. We had to let them go,” says Carla. The strong instructors stayed, and the team has now grown by about 10 instructors—Carla stresses they always ensure new teachers have a passion for sharing their knowledge.

Both Dan and Carla agree that their first few years at Delmar College were challenging and at times overwhelming as Dan put forward a series of changes that have since doubled enrolment. But as the quality of the program and its instructors improved, student numbers grew naturally.

“I love the fact that we’re working with people that are trying to better their lot in life—we’re career training,” says Dan. “You see people’s lives transformed. You see people who have been in many cases marginalized because they may have a learning disability, or others who may be broken because they’re not academic. Those students come to us and are often very creative and do very well, yet they may not have done well in a K-12 setting.”

Students are being engaged to the best of their abilities, which was one of the couple’s original goals. As for their goal of having passionate and engaged instructors, the Cavanaghs happily report that Donna Robbins, a hairstyling instructor who has been teaching at Delmar for more than 40 years, was awarded the 2015 Top Instructor Award from the Alberta Apprenticeship and Industry Training Board.

“She was nominated by students, and the apprenticeship board said it was one of the strongest nominations they had ever seen,” says Dan. It was also the first time that someone in hair and esthetics instruction received the award.

Feature image: Dan and Carla Cavanagh, both alumni of the University of Alberta’s Faculty of Education, are photographed inside the Students’ Union Building on North Campus, April 2016.