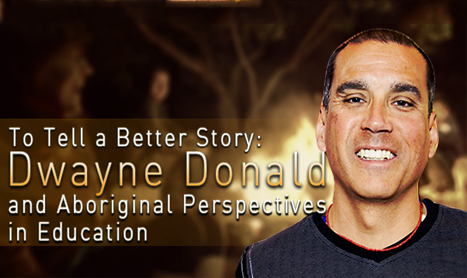 What defines the stories that we tell, as people and as educators?

Dwayne Donald, assistant professor, Faculty of Education, has devoted his life’s work to considering the stories we tell in the classroom, in light of promoting Aboriginal perspectives in education. Born and raised in Edmonton, Donald traces his heritage both to Norway and to the Papaschase Cree people who once lived in the University area. However, growing up in the city, he recounts having little experience with Aboriginal culture or the effects of colonialism. It was not until he travelled to Kenya to volunteer in the Mathare Valley slums that something hit home. “Before I went to Kenya, I did not really understand the colonialism here and the impact it had on my family story and Canadian society. I came back with a much more critical understanding.”

Donald later took a teaching job at Kainai High School on the Kainai Blood Reserve in southern Alberta. He remembers the initial sense of culture shock when he stepped into Blackfoot country. “One of the biggest things was this ‘ethic of non-interference’ that I saw…this idea that the best way to guide children is to not tell them what to do. You suggest things but, in the end, it’s up to them to decide. As teachers, we are trained to take a much more confrontational approach. I did that for a while, and it was very poorly received.” It was in the years at Kainai that Donald began to recognize a role for himself as a negotiator of the two influences – the indigenous and the settler – which shape his own life. Fittingly, his Blackfoot name, Aipioomahkaa, means “long distance runner,” or “messenger,” someone who moves back and forth between places. This constant sense of movement in Donald’s life is largely motivated by personal and pedagogical questions. “I had lots of questions as a teacher at Kainai. Why things were the way they were – you’ve heard the complaints about reserve schools – and what we could do about it... I went to grad school to connect those things. There was a story to tell, to myself if anything.” Parallel to this desire to connect the dots was also an interest in curriculum and how, historically and genealogically, it might fit with indigenous philosophy. “I see the work in education as basically a philosophical problem,” he explains. “And I think that one of the problems we have with Canadian identity is that we don’t have any stories to connect us, to teach us how to treat each other. All our stories have to do with colonization...I think that the deep rootedness of indigenous philosophies and stories, everyone needs them.” One of the ways that Donald tackles the philosophical problem of education is in recognizing the foundations for everything we teach. He explains that, oftentimes, our understandings of culture are based on a Euro-Western worldview. When considering Aboriginal perspectives, the tendency is to only take the surface “artifacts” of culture (the beads, the dances, the food, etc.) and to comprehend them under a Euro-Western lens. The foundational indigenous philosophies which provide those “artifacts” with meaning are not considered and so the story is incomplete. In this way, misunderstandings and misrecognitions are perpetuated.

The idea of indigenous metissage

In order to combat these misunderstandings, Donald has developed the educational philosophy of indigenous metissage. It is a story or “life-writing” approach to curriculum that makes use of inquiry learning. The intent is to understand place and the depth of how stories are braided together through the use of artifacts (photos, books, primary source documents, etc.). An example is the Grandin LRT Station. Teachers might take their students to examine the mural of Bishop Grandin standing outside a residential school. Donald then suggests asking students to think about the different stories (or “strands”) that are involved in the mural, including their own. “It contests the idea that we all live in separate realities. My commitment is to use the artifacts, the places, the stories, to show that relationships – especially the Aboriginal-Canadian relationship – are a lot more complicated than we were led to believe.”

For Donald, this emphasis on story comes through in his teaching at the University of Alberta and in his work with other educators. Having encountered some fear from educators over the years about teaching Aboriginal peoples and history, Donald provides them with a conceptual framework for what they are feeling. He believes much of the unease stems from feelings of guilt, defensiveness or neutrality – remnants of “colonial logics” – all of which can be paralyzing.  Conversely, these same logics have also trained indigenous people to overlook themselves and their own communities. Instead, Donald states, “All of us need to own what we have inherited. All of it. We need to own our commitments and histories and only then can we proceed. If we don’t have those stories, we live in poverty.” His work promotes the idea that, in understanding the places of origin for our own stories, we can recognize values and connections in the stories of others. “Again, it is this indigenous metissage,” Donald says with a smile. “It is this sort of curriculum answer to the question of how do you tell the story of your life without choosing sides?”

For this long distance runner, the goal of his work lies in the Cree principle of “miyo-wîcêhtowin” – a word meaning “having or possessing good relations.” It is the belief that, if we all face each other with good intentions, something positive will arise. Donald believes the wisdom that is found in indigenous philosophies are vital not only to education but to Canadian society as a whole. He sees his research as a means to respond holistically to the diversity of opportunities and challenges ahead.

“So the question would be,” he says, “is what kinds of story are we going to tell now, about all that happened before and of what we hope for in the future? And what is going to guide the telling of that story?”

For Dwayne Donald, it is not so much what defines the stories that we tell, as people and as educators, but who. “In this metissage sort of sensibility, it’s all of us,” he says. “We’re all working together, trying to come up with a better story.”

To find out more about Prof. Donald's research, visit: http://www.secondaryed.ualberta.ca/People/AcademicStaff/DwayneDonald.aspx