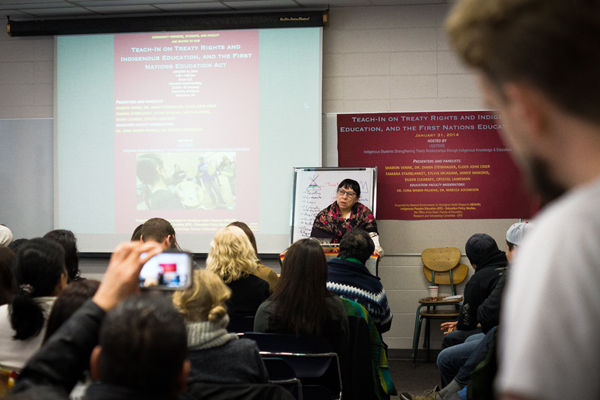 On January 31, 2014 a teach-in on Treaty Rights, Indigenous education, and the First Nation Education Act, was held at the U of A’s Faculty of Education south building.

This teach-in (an informal lecture and discussion on a particular subject of public interest), hosted by I:SSTRIKE, Indigenous Students Strengthening Treaty Relationship through Indigenous Knolwedge and Education, was a complete success.  The room was filled to capacity, people also stood to listen from the hallway.

The University of Alberta resides within Treaty 6 territory. Treaty 6, a peace and friendship Treaty, is the reason why we are all, Indigenous and non-Indigenous alike, able to live peacefully on this land. This Treaty was made in 1876 between 50 First Nation communities, and the British Crown.

Click here to view a map of Treaty 6 territory: http://goo.gl/BFgxk3.

Some of the principals of the Treaty include http://www.treatysix.org/about_principals.html

Those in attendance included Indigenous youth and community members, faculty and students, and dignitaries such as Deron Bilous, MLA, and Tony Alexis, Chief of Alexis First Nation. Chief Alexis also did the closing song and prayer.  Dr. Rebecca Sockbeson, moderator of the event,  remarked, “This is how a teach-in is supposed to look.”  The large audience came to hear the thoughtful and timely message of prominent Indigenous intellectuals and activists such as: Sharon Venne, Elder John Crier, Sylvia McAdam, Tamara Starblanket, Janice Makokis, Eileen Clearsky, and Crystal Lameman, who discussed Indigenous education, the First Nation Education Act, and Treaties.

Treaties were spoken of at length at the teach-in in regards to the recently proposed First Nation Education Act (FNEA). This act was designed by the federal government and the Department of Indian Affairs Canada to support improved quality of education and better results for First Nation students on-reserve.  Although it appears to be a beneficial step forward for First Nation education, this act is quite the opposite, as was outlined by each panelist at the teach-in.  The over-arching theme brought forth was that the FNEA was in fact an infringement on the Treaties.  Some of the problems discussed by panelists at the teach-in include:

1. First Nations cannot opt out of the FNEA - This is an infringement upon the Treaty rights of First Nations. At no time did Treaty First Nations relinquish their right to nationhood, their Inherent Right to determine their own destinies, nor allow any foreign government to govern them.

2. The minister can make regulations to any part of the act.  “The amount of control the minister has is unbelievable.  This act is like the Residential school system re-booted, an indoctrination process in a modernized context”. -  Janice Makokis.

4. Another major issue of the FNEA brought forward by the panelists is consent, or more accurately, manufactured consent.

At the most recent meeting on February 7, 2014 at the Kainai Blood Tribe, Prime Minister Stephen Harper and Assembly of First Nations Chief met to discuss changes to the FNEA, termed ‘the new deal’. Shannon Houle, a councilor at Saddle Lake Cree Nation, and acting proxy chief, was in attendance.   Councilor Houle spoke directly to Harper, Valcourt (Minister of Indian Affairs), and Atleo on behalf of Saddle Lake Cree Nation’s and Treaty 6’s disapproval of the ‘new deal’, of which the proxy chief was then  escorted out of the building  and was asked to leave the Blood reserve.  Houle stated after the event, “They were setting it up for Canada and everybody to make it look like everybody in that room was accepting and agreeing to this FNEA agreement they [Harper and Atleo] came upon. They were using our ways of respect to keep us quiet, the way they positioned everybody...They were making sure that we did not say anything, that we kept in line.” http://goo.gl/TIvGP9

“How it is we have so much information, but know so little?” ― Noam Chomsky

The meeting to discuss this ‘new deal’ at the Kainai Blood Tribe was announced on their web site approximately one day prior to the event.  Many chiefs and councilors across Canada were not able to travel to Southern Alberta in such short notice, and many were not even made aware of this meeting or the ‘new deal’.

Resistance has been showcased on social media via the ‘blue dot movement’ through photographs of Indigenous people and symbols that have been configured with a blue dot. This movement illustrates the dissent of many towards the FNEA and the manufactured consent of Treaty First Nations. http://www.cbc.ca/news/aboriginal/blue-dots-becoming-symbol-for-first-nations-education-act-resistance-1.2534518

The new deal is similar to the old FNEA in that it continues to encroach upon the inherent authority and jurisdiction of Treaty First Nations.  However, it differentiates from the old FNEA in that there is a budget attached.  Many believe that money is the answer.  However, as beneficial is it may be, there is no monetary value available that equates to ones inherent right to determine their own destinies, or the ability to govern their own nations, as what was negotiated in the Treaties in return for the ability for all to live peacefully on this land.

The teach-in also discussed how we can better the relationship so all can live peacefully on this land.  Sharon Venne, LLM, and also an alumni of U of A, spoke to this issue.  She related that all people living on Turtle Island (Canada) need to know about the Treaty.  Treaties offer direction as to how we can all live peacefully.  Knowing our history and knowing our abilities in respect  to this Treaty are  important steps in the right direction.