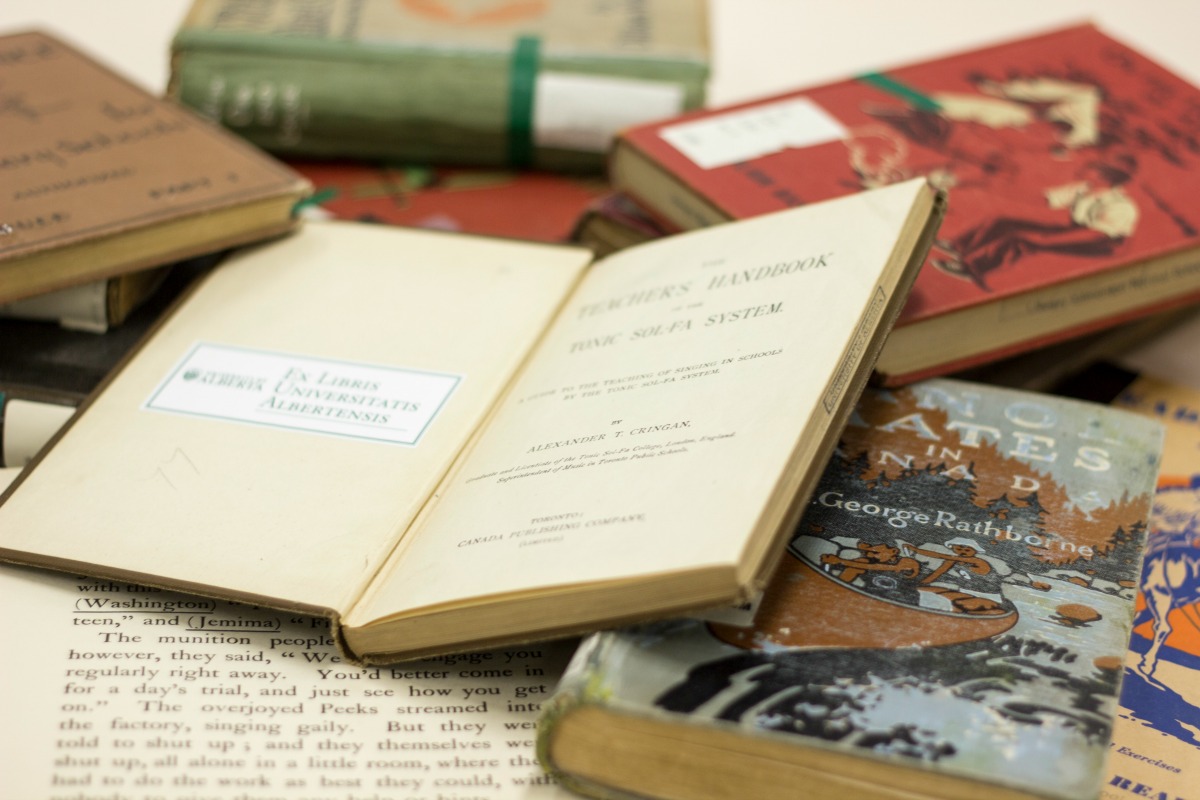 For decades, more than a century of Alberta’s education history has lived on in the Faculty of Education’s H.T. Coutts Library. Unfortunately, it’s lived on in a windowless room in the basement behind a locked door, accessible only by request. But thanks to a generous bequest from a former University of Alberta education professor, this archive will be available to anyone anywhere at any time.

A gift of $310,000 from the estate of Marie Wiedrick, wife of Laurence “Laurie” Wiedrick (1925-1982), a professor of elementary education who helped found the UAlberta School of Library Science, is being used to digitize the Coutts historical collection of more than 6,000 textbooks reaching back to the 1880s that were used in Alberta schools.

A gift that will keep giving

Frail said Wiedrick’s gift was unusual because there were no stipulations about how the money was to be used.

“Most of the times when you receive a bequest, the money is to be used on a specific subject usually related to the donor’s area of interest. So to receive money where it was totally up to our discretion how to use the money was a great opportunity. We wanted to put it toward something that would be worthwhile cause that would have real impact,” she said.

Having recently completed the digitization of more than 3,000 curriculum guides in the historical collection, the Coutts Library Advisory Committee in consultation with departments across the faculty decided that digitizing the much larger textbook collection spanning the years 1885 to 1985 would be money well spent.

Frail said the physical collection has always been available on-site to students and researchers, even though handling the sometimes fragile materials contributed to their deterioration. Not only will the digitized versions aid in the preservation of the original items while making the material available to anyone whenever they want it, the collection will be searchable by keyword, allowing users to jump instantly to the content they’re looking for.

“It opens up new forms of scholarship that weren’t possible previously,” she said.

Since the start of the digitization project with the help of Internet Archive, a U.S.-based non-profit organization devoted to preserving cultural artifacts in digital form, the opportunity arose for the Coutts Library to pilot a circulation model called controlled digital lending (CDL) in Canada. CDL enables a library to loan digitized copyrighted materials based on the total number of copies it owns.

In the case of the Wiedrick collection, if one physical copy of a copyrighted work remains on-site, the Coutts library will loan out one digital copy of that work. CDL also imposes technical measures that keep borrowers from retaining a permanent copy or distributing additional copies.

Frail said that since the implementation of CDL in January of this year, 200 items from the Wiedrick collection have been borrowed digitally, with a growing waiting list.

A treasure trove for researchers, teachers and students

Professor of educational policy studies Jonathan Anuik said he has used the Coutts historical collection in his graduate-level courses to get students to track the evolution of the way a particular subject was taught in Alberta, as well as the policy around curriculum.

“It forces students to think about where the priorities were for education—who got an education, who benefited from the system of education that was available,” Anuik said.

“The dark side of studying curriculum materials from the past is sometimes you see how little has changed, and you start wondering whether the system really worked for people. So it allows for a lot of important conversations, and making this material more accessible and searchable goes a long way toward doing that, so I think it’s a great investment.”

“There’s rich potential for teachers to use the Wiedrick collection to find examples of how an event in Canadian history has been discussed and written about over time, and to look at multiple accounts of a given event,” Peck said. “That’s a really nice entry point for developing students’ historical thinking skills that will lead them to question why historical accounts differ, and that opens up a wonderful conversation about how historical accounts are constructed, and how they change over time.”

Frail said the digitization of the historical textbooks is well underway, with more than 2,300 of the items now available online, and that all the materials up to 1985 should be digitized within the next two years.