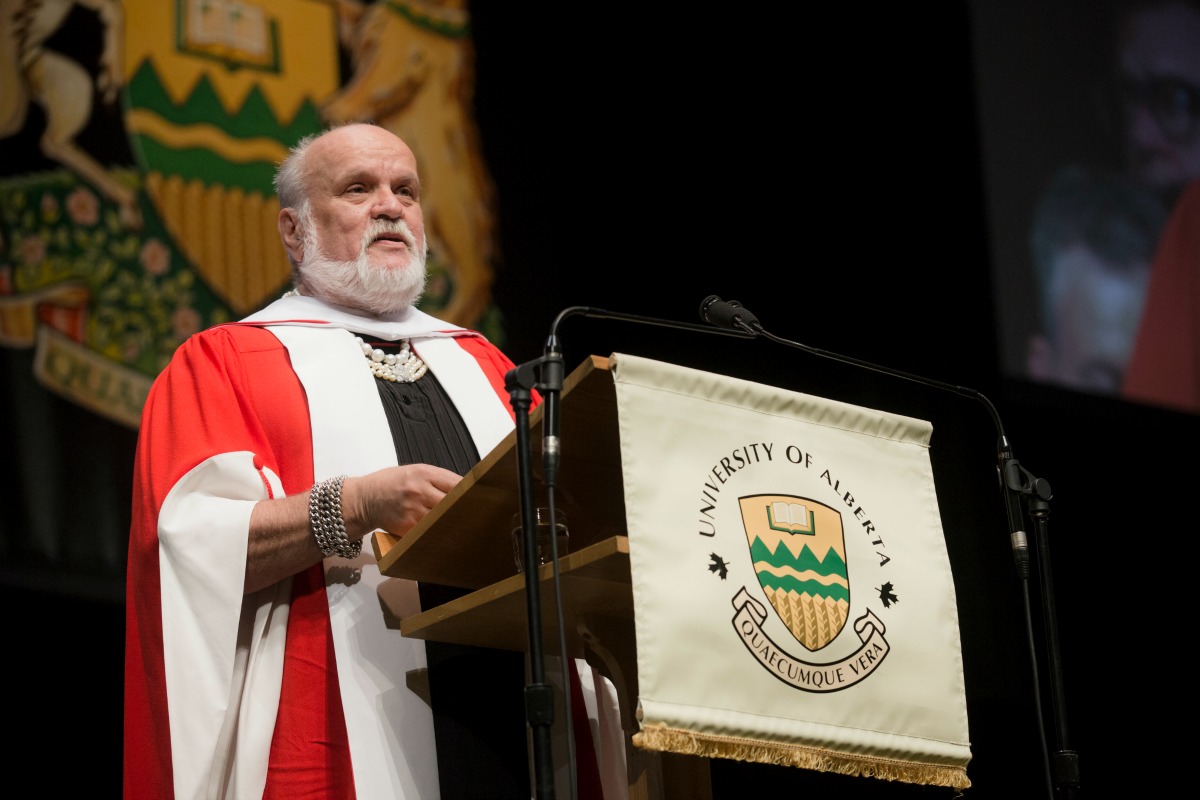 He’s raised millions of dollars in support of hospital patients, the LGBTQ community and numerous other social causes, yet Salah Bachir isn’t one to brag. Far from it, in fact: Bachir is jovial, earnest and eminently humble as he discusses his philanthropic career.

“The funny part is, I don’t think I’m such a great expert at it,” he says. “I’ve seen people do it better, honestly.” Bachir, known affectionately as “Gala Salah,” is one of Canada’s foremost philanthropists and fundraisers. He is a University of Alberta honorary degree recipient (2016), Order of Canada recipient, Chancellor of OCAD University, and president of Cineplex Media. He was recently named Outstanding Volunteer Fundraiser by the Association of Fundraising Professionals.

Bachir may not think of himself as a fundraising expert, but it only took him 12 hours to raise a year’s worth of funding—$76,000—for Camp fYrefly Ontario. Camp fYrefly was founded in Alberta in 2004 by UAlberta educational psychology professors André P. Grace and Kristopher Wells, who are also co-directors of the Institute for Sexual Minority Studies and Services. The camp is Canada’s only national leadership retreat for sexual and gender minority youth.

A champion for the camp

Bachir became involved with Camp fYrefly after meeting with Wells and former dean of education Fern Snart. The pair recalls their first meeting with Bachir fondly: what began as a 15-minute introduction quickly became an hour-long conversation that marked the start of Bachir’s relationship with the University of Alberta and fYrefly.

“We spent a lot of time talking about stories and what it means to be LGBTQ people in this country and how to overcome barriers and, importantly, what it means to give back,” Wells recalls. “I think that’s what impresses me the most—where we really connected—is, each of us in our own way are community builders and the saying goes you get the kind of community you’re willing to create.”

Snart remembers initially being struck by Bachir’s office, which she describes as a veritable art gallery. But what really made a lasting impression was simply how welcoming he was: he immediately put them at ease and was willing to give them far more than their allotted time to hear about their work.

“This is a man who was an immigrant, who built a life and a context for himself including the art, but much more than that,” she says. “He has actually suffered quite a bit in his life but never ever portrays that. He portrays and really encompasses the beautiful parts of life: generosity and compassion, caring. That’s certainly his work with the 519 in Toronto and his work with us in the context of making Camp fYrefly larger and able to reach more of the youth that actually need it.”

Inspiring others to give

Bachir has focused many of his fundraising activities around the LGBTQ community and hospital patient care, both causes close to his personal experience—something he says is key to any fundraising work.

“I’ve always had a soft spot for social justice,” Bachir says. He’s been involved in fundraising since the 1980s, a time at which he lost many friends to AIDS. That marked the start of his extensive philanthropic work with the LGBTQ community. He’s currently the honorary patron of the 519 Church Street Community Centre in Toronto, which provides services, space and leadership to the LGBTQ community. He organizes the 519’s annual gala and personally donated more than one million dollars to their capital campaign, which allowed them to increase their overall community space by more 45 per cent.

“I think he’s incredibly caring and compassionate about the needs of people in our community,” says Maura Lawless, executive director of the 519. “It was always very important for him to talk about the value and the role that community centres play in providing community space and community programs and services.

“In a lot of ways he is someone who inspires people to give,” she continues. “Building healthy, vibrant communities across Canada: I think those are things that motivate him.”

Fundraising is so much more than just the dollars and cents of it, Bachir says. He admits to a selfish motivation for his continued philanthropic work: “It is actually, I think, the best therapy for anybody,” he says. “It does make you feel great and it does make you feel good about life.”

Bachir is known for his spectacular galas—hence his nickname—but one of his most memorable fundraisers was the complete opposite. In 2013, spurred by his experience undergoing dialysis treatments at St. Joseph’s Health Centre in Toronto, he raised $210,000 through a “non-gala gala” where he asked patrons to skip the big evening out and just make a donation. “You don’t have to go buy a fancy dress, get a sitter, go eat some lousy meal and listen to boring speeches—just give me money,” he describes with a laugh.

With so many causes worthy of support, Bachir offers some practical advice to those working in fundraising: do your homework and continually follow up on the organization’s progress and spending; keep the bigger picture in mind when you feel frustrated; don’t be afraid to ask for money—and don’t take it personally if the answer is no; it’s easier to convince people to donate money to a cause if it’s something to which you already donate your time; and follow your passion.